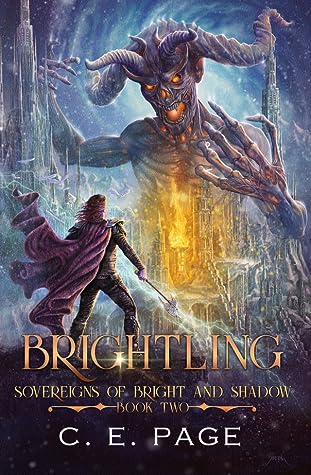 Series: Sovereigns of Bright and Shadow, #2

The hunt for a cure led them right into the heart of the Between, but what price will they have to pay to secure it?

Caught in a deadly trap made of their own memories, Nea and Garret must find their way out before it’s too late. But as they delve deeper into dangerous intrigues that cross realms, they are confronted with knowledge that changes everything. Can they overcome this new threat? Or will they lose themselves in the unfathomable wilds of the Between?

Back in their home realm, Margot is desperate for a distraction from Nea and Garret’s prolonged absence. With mounting rumors of restless dead and a tangled web of secrets left behind by Nea, she goes on a quest for an explanation that will lead her all the way to the City of Stars. There awaits a revelation that could plunge the known realms into chaos.

As they all close in on the answers they seek, will they persevere or be swept away by powers beyond any of their control?

Brightling is a really fun read, but it gets confusing at times, especially with Nea and Garret in the Between. The Between is the realm or whatever-you-call-it that seems to be between life and the final rest of the dead, and it is inhabited by lots of strange creatures. Sometimes it seems like a pretty normal place with normal laws or patterns to the way it functions, but at other times it’s like the warping of a dream. There are a lot of other characters out there, in the ‘ordinary world’ doing different things, all connected to each other, but also soo many, so it got a little difficult to keep track of everything at times, especially as some elapsed between when I read Deathborn and reading Brightling, but it was not too bad.

The characters continue to be vivid, feeling like real people with real personalities, real mannerisms and expressions. However, Declan in this book did not have quite the same exceptional reality to me that he did in Deathborn. Honestly, I can’t think of any other characters who felt real, present almost, in quite the same way that Declan did in Deathborn. That’s lacking in Brightling. He’s still very vivid and feels like a person – like Nea and Garret and most of the other characters in the book – but not there in the same hard-to-define way. At the same time, we get to learn more about the characters – we see glimpses of Nea’s past that shapes who she is today, for example, and we learn important secrets about the pasts of others, including Garret and Harvey.

My feelings about the development of Nea and Garret’s relationship are somewhat mixed, but for the most part I really enjoyed it. Especially how, even when they can’t trust themselves to stay true to what they believe and who they are, to not give into temptation, coercion, the lure of power, corruption, they’re able to trust each other. And that trust of each other is what allows them to move forward.

However, I enjoyed watching Harvey and seeing his need to be useful, and some questions about self-acceptance that get raised. There is a concentration of people who feel a need to be use and to save others in this book. And another part that was a favourite of mine, was when Garret explains to Nea that he knows she wouldn’t have asked him to take a certain price to save her, because he would not either, but that does not mean he should not have done it.

I felt like there were a few times in the book when some of the relationships took second stage to the plot, though, but some people might not experience it that way, since I tend to read books that focus very much on the relationships.

I think in this book my favourite character was Molly (who is one of the characters who does not have magic or any particularly special magic or keen-sense or anything like that, but it’s not as if she’s disturbed about it or every thinks about it, she’s just Molly, and she’s down-to-earth and stable in a way, and she loves Margot and Nea). Somehow, she stood out most, and she didn’t feel as real as Declan did in the last book, but she did feel quite real. I like her protectiveness. And Margot, the healer mage. That pair stood out in the book a lot. I just felt like Margot and Molly should have spent more time together or tried harder to stay together or – something.

The world-building and lore is magical, engaging, and layered. It turns out that the situation in the Between and with the Shadow Man is a whole lot more complicated and other than what the stories tell and the characters assumed, and I won’t spoil it outside the spoilers review, but I enjoyed it a lot. It’s a world rich with easy-to-visualize magic of all sorts, and I enjoyed finding out a bit about what’s really going on with the Shadow Man and the Bright Mother and the whole mess with corruption and the Between, even though I’m sure we still don’t have it all straight, and it was kind of neat how it looks like the stories and myths have elements of the truth, but are also kind of wrong.

Brightling really pushes the Chosen One trope for all its worth. Normally, I’m not a fan of the trope, but for some reason it didn’t really bother me in this book – I didn’t even really notice it, just realized it thinking about writing the review. It didn’t feel so much like a trope in this case, as an organic part of the world, though I’m not really sure why. It’s all super epic. So if you want something so epic and involved and skin-tingingly epic … this series is that.

If you’re looking for something really deep, that asks questions and provokes soul-searching thought, or invites epiphanies about the world, I don’t think Brightling is the book for you. But if you want some cool escapism, with characters that draw you in and make you feel for them, with neat and involved world-building that’s not too complicated, except for some of the stuff with all the too-many people and the ways their lives intwine that I didn’t quite follow all the time (but was also interesting), this is a great book. Especially if you want something fairly light, an enjoyable, easy read, but one that doesn’t completely ignore the effects of the trauma on the characters and touches on heavier themes. This one does a good job of being aware of that – I think it’s a result of the way the characters feel like people – but it’s not really heavy for the most part.

And that’s it. I don’t think I feel a need to share any of the real spoilers.

Review for Deathborn (Book One)

One thought on “Book Review: Brightling (Sovereigns of Bright and Shadow) by C.E. Page”