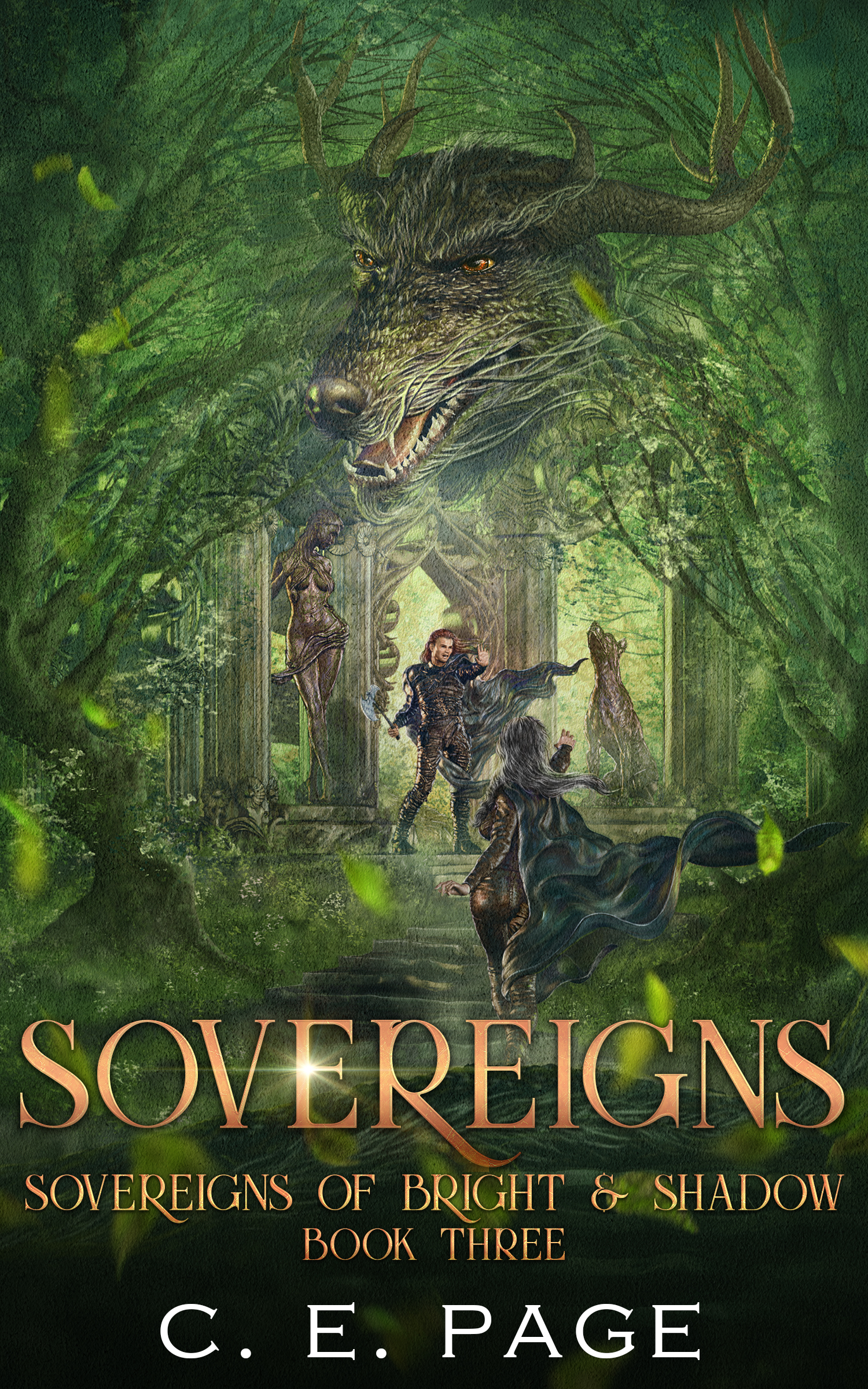 Series: Sovereigns of Bright and Shadow, #3

The barrier has been torn asunder. Now they must find the seat of the Sovereigns’ power before the mortal realm and the Between collide, altering the fabric of the known realms forever.

Under the Usurper’s influence, Leon has left nothing but destruction and undead in his wake. A chilling reminder of the future the world will face if Nea and Garret cannot find the Thrones of Eternity before the Usurper does. Hunting for clues to the thrones’ whereabouts, Nea races to the enchanted isle of Quel’sapar. But with the death ward now linking her keen to Garret’s, the itchy stirrings of his corruption could prove a fatal distraction.

The hunt will lead them deep into the mountains of the Spine. There they will finally face down the Usurper and learn that to liberate the Sovereigns, one of them will have to sacrifice everything.

Writing this review is going to be a bit difficult, because some of what really got my feelings going was definitely spoilers, so this one is going to be a two-part review again, even though I don’t think I’ve been doing a lot of those recently!

As I’ve learned to expect from the previous two books, Sovereigns is complex with a lot of characters in different places having complicated and hectic experiences that weave together the storyline. However, I think I found the events, who was where and doing what and what happened, much easier to follow in Sovereigns, even as the world is ripped apart and there’s magic everywhere.

The thickness and variety of the magic is enchanting, and I enjoyed seeing the relationships between everyone develop. As previously, personalities are vivid, unique, and easy to feel. Several people are forced by the epic scopes of the overtowering events to face and learn to use strange keens – magic – that has been locked away, and there’s a fair amount of discussion of interpersonal relationships and choices. I really enjoyed watching Margot and her relationship to the anchor spirit Warren put in her near the end of Brightling develop. The spirit is a child of the Shadow, like Nea, and she and Margot make a very good team.

I still consider the series, and Sovereigns, to be more of a fun escapist read than anything else, but there’s as much trauma in this one as any of them – though I’m not sure, Deathborn seemed pretty rough in some ways, too. Declan is understandably … not exactly comfortable or his usual excitable self when talking about his death and the circumstances of that, and certain other people come across nosy at times. As always I enjoyed Declan, and one gets to see how his feelings and perspective on life – not just directly related to death – has been affected by his experience, by the grief he saw when he was haunting Nea, but the second chance to live. There is also an instance of torture and of the responses to that, some of the healing from it, and references to the way a scar affects/reminds one of the … victims. I also enjoyed how the corruption is healed. Margot, with the child of Shadow spirit in her, Nea, and Garret can all do it, and I rather liked it.

And here’s a quote I’m sharing on impulse:

“A bit of advice that Nea should have listened to; don’t push everyone away because you’re afraid they might get hurt. We’re all capable of making up our minds about the risks we are willing to take.”

But there were a few things about Sovereigns that I did not appreciate, most of them more or less around the end. The first, that I don’t think is a spoiler, is that so many of the characters get comfortable paired off by the end. It gave the impression that, for a story to be finished, everyone has to have found a partner or a life-mate or a spouse or whatever you choose to call it, and the characters were simply getting paired off for that to happen. Some of the pairings made sense. Some of them I could feel. But there were simply too many of them. As if anyone at all important to the story simply had to have that in their life, and wrapped up, too. It seriously annoyed me ….

So, this did spoil the story for me quite a bit, so I don’t object to calling it the “Spoiler” review this time.

I suppose I should have anticipated it because of the line “one of them will have to sacrifice everything” but I didn’t. Though it was not a character death that spoiled things for me, but characters not dying (or staying dead) that was the spoiler.

In the final showdown with the Usurper, to claim the Sovereigns’ Thrones, it’s revealed that someone must die to claim that power. Now, if one of Nea or Garret dies, the other will also, because of the death ward – a magic that links their souls and their keens and makes it so when one dies, so will the other. But Nea has apparently found a way to circumvent this power of the death ward, so that when she takes the blow to open the way, when she dies, Garret won’t (and instead, he will be able to bring her back and make her a deathwalker – one who lives after dying – like Declan). But Garret doesn’t know this.

And he fights their last battle believing that any moment, when Nea draws her last breath, so will he. And he faces the freed Sovereigns in that same knowledge – only to learn it isn’t true, that Nea found a way around the death ward, that she’s dead and he isn’t. And that he might be able to bring her back (which he does).

That kind of spoiled it for me. Those scenes were so perfect, and the emotion so raw.

“You can’t save her? But you are gods – take my life and spare hers.”

“It doesn’t work that way, and even if we could, we wouldn’t,” the Mother said gently.

Garret nodded. It didn’t matter – the ward would take him soon, too.

Oh, the writing! It’s perfect, heart-throbbing! I would have loved it soo much if … well, if they’d died. It would have been exactly the sort of thing I like, and elevated the series to a rare place of splendor (for me). As it is, it felt like as the story approached its end, it was forced into a mold instead of being itself, and … well, I really liked the books, but unfortunately the way they ended taints all of them for me.

Review for Deathborn (Book One)