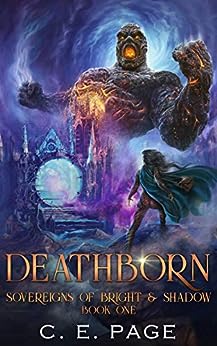 Series: Sovereigns of Bright and Shadow, #1

Corruption is a disease with no cure that ends with a rapid descent into madness and violence. And until now it only targeted mages.

When an infected warden shows up challenging everything Margot thought she knew she is thrown into the chase to find the impossible cure. But to understand this new revelation she needs someone who knows possessions … She needs Nea and lucky for Margot, her warden friend Garret has been tasked with tracking the rogue necromancer down.

Garret is used to dealing with deadly mages so this should be like any other job: find the mage and deliver her to the king. But from the moment he finds Nea he is dragged in a deadly game of dark secrets and brutal machinations. Now he must make a choice: deliver Nea as promised and place a weapon in the hands of a mad man or deny his king and change the lives of wardens and mages forever.

The First Review (Spoilers are not welcomed yet):

Deathborn was a really engaging, fascinating read. The characters felt like real people; especially with the storm-mage Declan, it was almost as if I could feel their presence, as if they were there. It didn’t just feel like they had realistic personalities like some books; it’s hard to describe, but I haven’t read a lot of books like this, where it felt like I could feel him, really hear him, see him, knew him as if he were there. All the characters felt like real people, though Nea, Garret, and the rest did not feel quite as real as Declan. I don’t think I’ve ever encountered a character who felt quite present like Declan elsewhere, though I don’t know how to describe him well, something that often happens with the things that resonate with him most. But he’s a winsome, intelligent, curious, ever-hopeful Storm Mage, most comfortable with lightning.

The action and movement of the plot was well-balanced with quieter moments, with some introspection, and with conversation that developed the characters and their relationships. The description is balanced, but sometimes quite intricate. The world-building is intricate, having a lot of depth that can’t possibly be shown in one book, but feeling like it hangs together, and quite interesting and beautiful. The book starts in the middle of the story, and while it does not exactly start with action, there is so much going on and there are so many characters involved, and I found that it took me a while before I knew what was happening. It was easy to get confused and to have a hard time following who was whom and had what relationships with whom, even with the main cast, characters we hear about, or even hear in conversation, every chapter or second chapter.

At first, the title of the book and the content of the back cover – specifically relating to corruption and necromancers – made me concerned that the book would be heavy with elements that would really put me off. However, I did not find it over all disturbing. Which isn’t to say there is nothing that could be ‘disturbing’ in the books. Nea, as well as other characters, are put in situations where they have to make decisions they find very hard, and sometimes they end up doing pretty horrible things, and sometimes other people – like Evard – do very horrible things, and some of that is before the book starts. So there’s a lot of trauma some of them have, and have to work through, as well.

The Second Review (I know there are spoilers here):

For some reason, I don’t have all that much to say about Deathborn, even though I really enjoyed the read and I really loved the characters, especially Declan. Declan gets killed very early in the book, so I’ve probably kind of spoiled things for some readers, just by mentioning him so much! His constant interjections, his light-hearted remarks, his constant penchant for following theories – and sometimes his pain, his grief at how when his father died, it really hurt his mother, and so he promised to be there for her and not die, and then he got himself killed for something that did not turn out to be so useful – I don’t really know why, but he felt so real, it felt like I knew him, like I heard him, like I felt him.

As far as I can tell, most of the other characters are as real. Nea is a bit like Declan in some ways, in how she follows theories and such, and she is scarred by the trauma she’s been through – and that she goes through – the slaughter she saw, when Evard destroyed the college of healing mages. She’s stubborn and loyal and devoted and impulsive, and I loved her. And Garret is conflicted and finally finds the courage to make his choices, choices he should have made earlier, and there’s Molly who’s so beautifully, defensively fierce of her love, Margot, who’s Nea’s friend. Molly seems like a healer, but a fighter too, a tigress. And Margot is a healing mage, and she’s sweet and strong and full of hope most of the time, always believing in Nea.

2 thoughts on “Book Review: Deathborn (Sovereigns of Bright and Shadow) by CE Page”