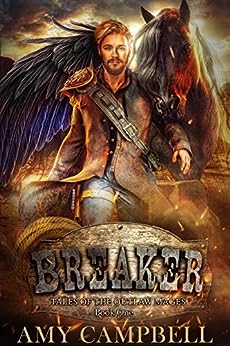 Series: Tales of the Outlaw Mages, #1

The citizens in the town of Bristle have called Blaise every name in the book. Born a Breaker, his unbridled magic wreaks havoc with a touch. As his peers land apprenticeships, Blaise faces the reality that no one wants a mage who destroys everything around him. When enemy soldiers storm the town hunting for spellcasters, he has no choice but to escape and rush headlong into the unknown.

A chance encounter with a pegasus sets Blaise on the path to a new life. Despite the machinations of a surly gunslinger, he finds a place to belong in the hardscrabble world of the outlaw mages.

But even an outlaw mage can’t outrun his past, and Blaise’s returns with a vengeance, threatening his chosen family. Can Blaise find the grit to harness his volatile magic into a saving grace, or will his most dangerous challenge be his last?

Blaise is a very kind-hearted shy main character, made all the more inclined to tuck his tail between his legs and try to hide by his past, where his magic has constantly caused problems and made him seem to be a problem or useless. The story is very, very character-driven; the plot is about Blaise, what happens to him and how it makes him feel, grow or not grow. His homesickness and loneliness when he flees from his family and town when the soldiers of the Salt-Iron Confederation come looking for mages, the way he reacts to the menace of others, like Wildfire Jack, his love of baking, his shyness to bring forth anything he might not do adequately to the expectations of others, Blaise’s constant urge to understand, to be kind and give others – even if they’ve hurt him, even if he’s afraid of them – the benefit of the doubt, of trying to understand why, his responses to everything that happens, are all at least as much a part of the story as anything else, as the things that happen.

Nonetheless, there were times when the writing felt lacking in some way, as if pushed into an external shape. No one did anything out-of-character and it was not that there were any plot holes or that it stretched believability. It just lacked that touch at times, that immersion, like it was not written from an intimate understanding or following of the characters particularly the main character, but from what was “supposed to happen.”

I really liked how all the characters were considered. Sharing the details here would be ‘spoilers’ if I am capable of making any judgments as to what is a ‘spoiler’, so you can learn more in the next section, but I will say I liked how the motivations and complexities of people’s actions were shown. It’s not at all grimdark in the sense that there are no “good guys,” people with wholly or dominantly good- or kind- hearted responses, beliefs, and so forth, but a lot of people who seem to be “bad guys” on casual inspection turn out to be a lot more complicated than that, not so much “bad guys” as people forced into very difficult situations, and there’s a lot of openness in who they are and their stories.

Also, I wished there more of Emrys, the pegasus. It’s so sweet the way Blaise rescues Emrys when he is in need himself, and it’s just how sweet how protective of Blaise Emrys is. But I felt like there should have been more about Blaise and Emrys, like Emrys should have had more of a place in the story and in Blaise’s thoughts and feelings. There wasn’t enough of the black pegasus.

The Real Review (‘Too much knowledge’ can never spoil!):

One of my favourite places of the book was after Blaise finds out that it was Walker who shot him, and that Walker was working for the man who is, in one way or another, responsible for a great deal of the pain and sorrow that has happened, Gaitwood.

It was senseless for Blaise to be angry with the wounded man. He wasn’t Jack, to wear his wrath like a duster. Blaise only wanted to understand.

Blaise stared at the fallen man in dismay. Fear. Walker feared him. Blaise didn’t like that; the role of a bully was the last thing he desired. Did he have reason to be upset with Walker? Yes. Did he wish him ill? Absolutely not. He took a deep breath to compose himself.

“Do you need help?” Blaise asked, approaching at an angle to appear less threatening.

A few minutes later, they’re conversing. I should give you some background. Blaise has made a sort of home in Itude as the town baker, but the water tower collapses, and the rumor spreads that it has to Blaise who did that, since he’s the only one with the magic to do it and he is a Breaker after all. (In fact, Walker used a potion to break down the water tower.) Blaise feels betrayed and confirmed in the belief nowhere will ever be home; he’ll never be accepted; people will always turn on him. He flees Itude with Emrys to take up Jefferson Cole’s (Jefferson Cole is an entrepreneur from Ganland, a nation of the Salt-Iron Confederation) offer to go into business with him as a baker. That’s the only way Blaise knows: to flee, betrayed, because he can’t prove himself, can he, and no one really cares or wants him either (except Emrys that is, but I’m not sure Blaise has got used to that yet). This is after he comes back from Rainbow Flat where he met Jefferson Cole, discovered Jefferson Cole is respectfully in love with him, which is very new for Blaise, as he isn’t interested in those kinds of things and has never (at least that he’s aware of and processed) been someone else’s interest that way either, and been validated by Cole in a lot of ways. Not as if Blaise is used to people being interested in or valuing him for himself (or despite his magic as a Breaker mage) in any way, romantic or otherwise. Though he has far more of it than he thinks or is ready to acknowledge.

Walker picked up his fork again, poking food around his plate. “Why did you come back? I know what people were saying about you.”

I’ll bet you do. Blaise somehow kept a neutral expression. “Because I’m through with letting other people’s perceptions rule my life.” He pushed his plate aside. “I’m not going to be manipulated anymore, and you shouldn’t let others manipulate you.”

And this is where we find out Walker’s heart-breaking story. Above all, whatever wrong he’s done, however excusable or inexcusable it is or isn’t, he is loyal to his brother, Joshua, who’s had problems since he was born and is not right in the head; a simpleton or something like that. Through thick and thin, he’s protected Joshua, through being sold into slavery, through everything, at whatever cost to himself, and that’s how Gaitwood manipulates Walker and why Walker did the evil, destructive things he did, only to be betrayed by Gaitwood and have his leg shot out. So when Blaise offers Walker the chance to be part of rescuing their captives, and promises to make sure Joshua is rescued, too, Walker accepts. (Of course, Blaise has to fight with surly outlaw, Wildfire Jack, over it, but for various reasons, Blaise wins, with the concession that if Walker betrays them this time, Jack is going to kill Walker).

That is one of the things that is cool about Breaker. Some people, like Blaise, are just good no matter what, and as timid as they are, they have the courage to protect what they love, to risk themselves for others. They’re just sweet. There are people like Wildfire Jack, who maintains an exterior of being uncaring and harsh, but is deeply hurt by life, and he does judge when he shouldn’t, but he just wants to protect what he cares about. There are people like Walker, who aren’t really so different. And there are people like the Gaitwood brothers, who might have some redeeming traits, but if so, we don’t know what they are.

Sometimes I wonder how much I should put into a review. I’ll say again: I wish there was more of Emrys, but what there was – I love the pegasus’ loyalty to his rider, and of course he has a sweet personality and a lot of sugar-tooth (something pegasi are known for). I wanted more scenes of him and Blaise, talking about important things, like Blaise’s troubles, or Emrys telling Blaise about places and things (since Blaise is afraid to fly Emrys). I love how Emrys stands up to Jack, and how Emrys is determined to go with Blaise anywhere, even into the Salt-Iron Confederation (and how he follows Blaise when Blaise is captured after destroying the airship the Salties used to ravage Itude while he was away, that was originally built (funded rather) by Jefferson Cole for trading purposes).

That’s sweet, too, how Jefferson falls in love with Blaise, wanting him just for who he is, seeing him as valuable. A lot like Emrys really, that sweet, staunch pegasus. Together, they will help Blaise to find the confidence he needs and lack, even in the darkest situations.

Jefferson sat back, giving him an exasperated look. “Do you wish me gone?”

Blaise shook his head, terror gripping him at the thought of being alone. “No, no. I just … you deserve better.”

“You’re being ridiculous,” Jefferson returned, leaning closer once more. “You’ve been around me long enough. You’re aware I’m a man who knows what I want.” He moved in, brushing his lips against Blaise’s. Gentle, merely a reminder of his feelings on the issue. “I’ll fight the entire Salt-Iron Confederation for you if I must.”

Blaise stared, heart thudding. No one had ever spoken to him like that before. He swallowed, closing his eyes. He may be in enemy lands, but he wasn’t alone.

2 thoughts on “Book Review: Breaker (Tales of the Outlaw Mages) by Amy Campbell”