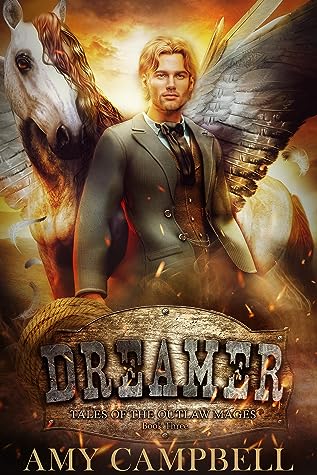 Series: Tales of the Outlaw Mages, #3

Their dream of freedom will turn into a nightmare unless these outlaws can stack the deck in their favor.

Safely back in his chosen home, Breaker mage Blaise should only have to worry about his bakery and his complicated relationship with Jefferson. But the lies that shaped his life continue to haunt him, and he sets out to reconcile with his mother—only to discover that a band of magical desperadoes has taken her. With old friends at his side, Blaise sets off across the frontier, chasing down leads and unaware that his new foes hope to snare the Breaker, too.

Meanwhile, Jefferson balances guiding his fledgling homeland to nationhood while concealing magic he’s not supposed to possess. The demands of his ambassadorship send him to a faraway country where he’s embroiled in a web of intrigue between a shadowy cabal planning to use him and malicious politicians who want to see him—and the new nation—fall.

As Blaise closes in and Jefferson navigates the dangerous political waters, they realize their circumstances are once again linked. Will their combined magic be the ace in the hole that wins it all, or will they fold in the final showdown?

I received a free ARC of Dreamer. This has not affected my review or rating.

There’s a lot that happens in Dreamer, but really the book feels like a story about people and their lives, even their ordinary lives. Of course, before it’s over plot definitely picks up and they have all sorts of crazy adventures, but something I really enjoyed about Dreamer is how much the characters are shown as people who have their day-to-day lives and their relationships. Blaise owns a bakery, and he has to get up early to run his bakery, and there’s his relationship with Jefferson. We get to see them small-chat, have a conversation about how Present Jefferson doesn’t like Past Jefferson for asking Blaise they get up in the morning, but Future Jefferson will be happy about having delicious cinnamon rolls to eat. There’s nothing in particular going on (well, actually there is, since Jefferson is planning to leave for the delegation to Ganland to argue for recognizing the Gutter as a nation), but we get to see Jefferson and Blaise chatting, the differences between the out-going physically affectionate entrepreneur/politician and the reserved baker, the style war that’s become something of a game between them, as Jefferson is very style conscious and Blaise is anything but, and what might be one of the best signs of healing in Blaise, as he actually flaunts his carelessness of style in a sort of style wars with his lover. It’s really relateable and makes Blaise and Jefferson really relateable, seeing them live life.

I also felt like we got more of the pegasi in this book than any of the previous ones, which I really liked. Emrys is everywhere, as he should be, comforting Blaise, playing with and teasing Blaise, taking part in Blaise and Jefferson’s game, asking oh so sweetly and innocent for more delicious treats. Emrys is really cute and courageous and affectionate, and he has brains. (Sometimes, I think he’s the smart one. I have a feeling he would response to that comment by asking if that means he can have pie of every flavor please? He doesn’t seem to care about vanity or pride; only being Blaise’s loyal, constant friend and his sugar goodies.)

Blaise is, as ever, Blaise: compassionate, caring, seeking to understand, at once scarred and frightened and possessed of new confidence. He is so courageous, and it is so sweet to see him, from his banter with Jefferson, to his friendship with Emrys and the stallion’s loyalty, to his friendship with Emmaline and his comradeship to Jack, whether he’s baking for ghosts in a haunted house or impulsively saving Knossans from grasscats.

Jack has Kittie again, and he shows a bit of the kindness he (usually) tries to keep hidden beneath his ornery exterior. Personally, I don’t think it would hurt if Jack could just be a little kinder in general, but he really tries to be nice to Blaise when Blaise needs it, and he tries to patch things up with his daughter, Emmaline. I think he does start to act a little kinder, which will really help with his relationships, and he shows the caring side he has. Poor Jack is so afraid of being seen as soft and taken advantage of, and of having himself and the people he cares about hurt on account of that, he sometimes does a very poor job not hurting the people he cares about himself. And he’s been through a lot, himself.

Jefferson has a lot of challenges ahead of himself, too, in a world that is both familiar and unfamiliar. I love the courage he finds at the end, with Blaise, to choose his own path, unrestrained by the darkness and what others try to impose and manipulate.

One of the first thing that happens after Jefferson leaves on his diplomatic errand with a few other mages of the Gutter, and Blaise, Jack, and Emmaline go to visit Rainbow Flat, is that Blaise discovers that his family has been attacked. His mother – except she isn’t really his mother, before her change of heart and adoption of him as her own she abused him by giving him an experimental potion that turned him into the Breaker mage he is but almost killed him into the process – has been kidnapped, and his father is killed, and his little siblings are hurt and traumatized. And their little family dog is hurt.

Blaise’s sympathy, and something like guilt that he wasn’t there, and that he hasn’t visited before, is so real and sad. But we really get a view into the side of him that’s a loving, caring sibling, and he really cares about his family, but his avoidance is understandable. I think the way they approached him, the way he – didn’t exactly – comforts them is very real. And I really think the way Clover takes them in is fitting and matching who the Knossan is. By the way, Knossans are cow-people.

I thought Jefferson attending the funeral of his alter-ego, Malcolm was a little funny, among other things.

Blaise sets out with Jack and Emmaline to rescue his alchemist mother and stop the Unicorn Desperados, the Copperheads. A lot of different things happen, some of them involving using their magic together in some creative ways, but eventually Blaise and Emmaline get captured by the same people who captured his mother, and who want to sell them as slaves. There’s a Theilian, a wolf creature there, who’s heard of Blaise, and she’s young and frightened and alone, but he promises her he’ll get them out, and she works with him, and it’s so sweet.

“Guess you can do that,” the knocker said, eager. “Can you free us?”

Blaise pursed his lips. “In time. First, I have to find the alchemist.” He paused outside Lirra’s cage. “I’ll let you out on the condition that you have to go back in when we finish.”

The Theilian growled. “I don’t wish to.”

Lirra whined, her ears flattening. “I don’t want to, but I know what the lifesong says.” She hunched her fuzzy shoulders. “You won’t let us be sold?”

“No,” Blaise said softly, shaking his head. “I won’t.” He only hoped he wasn’t making a promise he couldn’t keep.

Lirra scratched a clawed hand at her throat. “I will work with you and return here when we finish.”

Blaise really strikes me as a friend of the creatures, and they agree. A little later, in the midst of a havoc-causing plan, a dangerous grass-cat decides that Blaise is their friend and gives him a ride. I think that was awesome, and Blaise deserves to be seen as the person he is.

At the end of Effigest, Jefferson, the Dreamer, trapped Gregor Gaitwood, who’s responsible for a lot of the pain Blaise has endured, in a world of nightmares. Since then, he’s been taking Blaise’s nightmares and torturing Gregor with them. When Blaise discovers this pretty late in the book, he gets rather upset that Jefferson was taking his personal experiences, his pain and his fears, to impose them on someone else. Not that the someone else didn’t deserve it, but that it was a breach of Blaise’s privacy. I thought that was thoughtful.

I have to say again, I absolutely love Emrys’ loyalty. Sometimes, I think he’s the smartest one of them all. When a Wall-Walker (a mage who can teleport through walls) grabs Blaise, Emrys manages to go with Blaise, kick her away, and take care of Blaise. That was almost my favourite part of the book. And they ride to rescue Jefferson, who has been captured by a group of conniving, unseen manipulators called the Quiet Ones (well, some of them are seen but they’re not known as a group) who spread the story that Jefferson is dead and Malcolm’s death was just a fake to try to use people for their own obscure ends. (The situation is more complicated, but I’m not writing a synopsis of the book).

That leads us to a scene with Jefferson that I really enjoyed. With Blaise’s support and the help of his friends, Jefferson gets the ring that makes him look like Jefferson, not Malcolm Wells back (by the way, the Wells family is terrible), and announces that he is not Malcolm Wells, Malcolm Wells is dead, and he is Jefferson, outlaw mage. And that’s it. He is not going to be controlled.

“I’m the reason you were captured in the first place,” Jefferson said, recalling the sight of the mangled airship and destroyed fort. “If I hadn’t asked you to use your magic to—“

“I would have done it anyway.”

It was Jefferson’s turn to look surprised. “What?”

Blaise edged closer, his shoulder brushing Jefferson’s. “I would have destroyed the Retribution anyway. Flora told me I didn’t have to. That you would understand if I didn’t.” He hazarded a glance before continuing, “I knew what I was getting into. Have you been blaming yourself for that all this time?”

“Obviously,” Jefferson said, boggled. It had never occurred to him that it might have been Blaise’s choice. He’d been so certain the kind-hearted Breaker had only done it at his behest.

“And you’ve been trying to make up for it ever since?” Blaise guessed.

“Obviously.” Jefferson rubbed his cheek as he considered this new information. “I made a grievous miscalculation, using my magic as I did. I should have told you.”

The last comment is referring to how Jefferson was giving Gregor Blaise’s nightmares.

Another thing I thought is of note is that, for Jefferson’s defiance of the Quiet Ones, he loses all his financial assets. The politician of wealth and the insanely wealthy entrepreneur is not dirt poor. But he has Blaise, and he has the pegasus Seledora who has chosen him as her rider, and it’s okay for Baker Blaise to be the breadwinner for now. If I may say, I loved that!

Review for Book One: Breaker