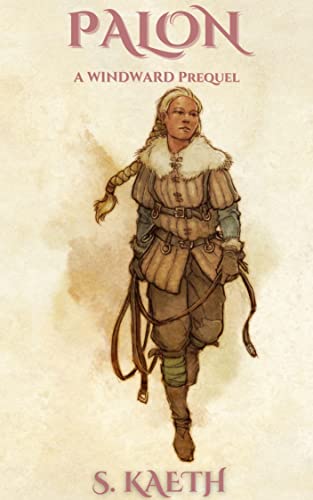 It’s not easy growing up part of a famous family. Twelve-year old Palon’s magic isn’t strong compared to the rest of her family’s, she has no special talents, and she’s constantly falling short of the mark. Desperate to stand out, she leaves home and bonds a dragon, Windward.

But life among dragons and other dragonbonded is not easy. Palon’s refusal to admit to mistakes makes it hard for her to fit in. She’s so worried about proving herself, she pushes people away. When Palon sees an intruder in the nest, no one believes her. Despite her insistence, they explain away her concerns, and soon everyone’s too distracted with a spreading illness to listen. Frustrated, Palon defies her mentor’s instructions and convinces Windward to help her investigate.

In order to heal the nest, Palon will have to trust that her newfound family will accept her despite her imperfections. And it begins with immersing herself in the wisdom of the dragon she bonded.

I’d read Windward a while back, and so I was really excited to see this prequel novella about Palon. Almost the first thing I did was opened it up and read it through ….

It did not disappoint. The characters are portrayed so vividly. I’ve read Between Starfalls and Let Loose the Fallen, so I know Palon’s older siblings, Kaemada and Taunos when they’re a bit older pretty well. They only have a few lines and short appearances in this one, yet those lines, and how they’re written, perfectly captures the sense of their personality. I see Taunos’ smile, hear the tone of voice with which he speaks to his little sister and vets the dragon coming to bond her, and it’s exactly Taunos. It’s the same with Kaemada, though there’s more of Taunos in the book.

And Palon! From the first few sentences, she is so much Palon, so very much a young, twelve-year old, child Palon. All the traits that make her who she is as a young adult in Windward, there here, and it all fits. Sometimes, an author goes back to write something from before, and there’s a forced tone to it, or else a note that’s always slightly off. Not so here. This is absolutely Palon and Windward. And seeing the development of their bond and how close they are makes some of the events in Windward – which I won’t spoil here, no more than that awkward and vague hint – hit so much harder. This is a novella which I think can easily be read without reading Windward, but it makes Windward so much more, adds depth to everything in it – the relationships between the bonded, the personalities of the bonded who appear in both books, Palon’s choices.

Palon is so relateable. Her needs feel like needs everybody has – to be loved, accepted. To belong. It’s how she responds to them and her drives that are different, as are everyone’s, though at the same time they resonate, as one can feel them growing out of a common need. Her need to prove herself, to never try anything that she might fail, especially to never try anything she might fail where others can watch her fail, so that if she fails they’ll never know. Her need to succeed. It has the drama of very real personal needs and struggles, and the way she goes from feeling inept and worthless beside her siblings in the kaetal – the society of Rinaryn, which is what Palon and the other dragonbonded are – to the nest with the other dragons and dragonbonded, to find it’s not what she imagined it is.

She stands on her own merit, but she still has to learn, and she has to overcome her fear of failure. Above all, that’s what her success will consist of: to overcome her fear of failure, and her fear of not being useful. Not being accepted. And this fear of Palon’s is so overwhelming and deep, that when she learns that her bond with Windward is something exceptionally strong for how new it is, she becomes obsessed with terror that there’s anything lacking in it, half-way afraid even to work on her bond lest it not develop quickly enough to meet other’s expectations – except she really has no idea what other’s expectations are. They are only her own. She is absolutely terrified of not being utterly spectacular at anything, especially something she’s supposed to be good at.

I loved her relationship with Windward. Their bond isn’t solid yet, but both who he is and who she is are starting to overflow into each other. He gives her that acceptance she craves so desperately, and he gives her support and trust when no one else does. But he also challenges her, challenges her to learn to relax, to accept and support the others. Yet in so many ways they are a matched pair. Windward. Born to fly, to soar, to ride the edge.

This wasn’t a book where the dragon is just along for the ride. His personality, and their arguments, flow through it. At the same time, he’s not just everywhere, since his and Palon’s bond are still weak, so she can only hear him sometimes, and sometimes even when she can hear him, she can’t hear him fully. But one of the things about it is that theirs is meant to be a partnership in the fullest sense of the word, despite the vast gap in size and strength, and experience between them.

I love this short little story about a girl with the heart of a dragon learning how to settle into her new family of dragons and their bonded. And how to be a partner with her dragon. Because that’s something Palon has to learn, too. As much as she wants to, it’s not a thing she has a lot of experience in.

This book has a lot of laughs in it, too. Some of Palon and Windward’s miscommunication issues could be funny (if Palon weren’t so touchy and embarrassed about anything she gets wrong). And her childlike approaches and responses that, even for all her embarrassment about getting things wrong, latches right onto that focus with the immediate that’s not completely wrapped up in adult priorities about what is and isn’t appropriate, is refreshing, too. Her scrapes, mistakes, and her terror of making mistakes – even in its very relatability, it was funny sometimes.

TL; DR: This is a story about a child with the heart of a dragon figuring out relationship and life issues in her new family of dragons and dragonbonded.