The Sword in the Street 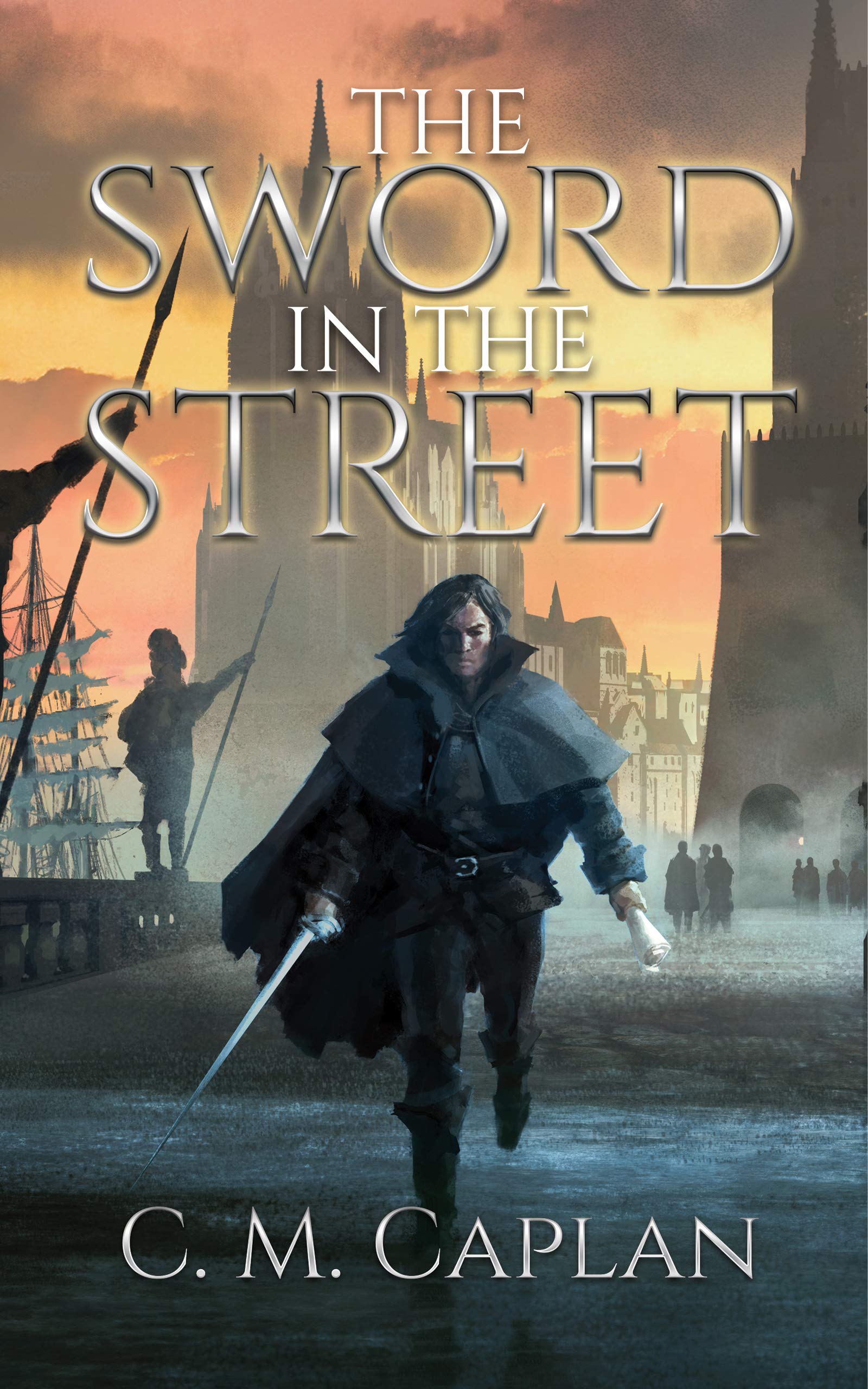 Trial by battle is a holy rite on Hillside.

Hired blades bleed their foes in savage duels, settling everything from petty grievances to the corporate laws that keep their citizens in line. Embroiled in these cutthroat political games is John Chronicle, an improverished swordsman with no better prospects, seeking the duel that will free him from the Dregs.

Meanwhile, John’s boyfriend Edwin, an autistic university student, befriends a fellow scholar who claims to study the arcane art of thaumaturgy. When she offers to teach Edwin this subtle magic, he hopes that he can use it to bolster John’s skill with a blade. But thaumaturgy is a dangerous magic, and the forces that drive it have other plans.

The couple soon find themselves entangled in the web of intrigue surrounding the swordsmen and their sponsors, and they’re forced to question how bloody they’re willing to get to escape poverty – and they don’t come away with the same anger.

This is a book I didn’t preview, but that I picked up solely because the author had said some interesting things (about his book, mostly) in some interviews and I was intrigued. When I picked up The Sword in the Street, I found that the first page just did not grip my attention. I tried to read it several times on different occasions, but when I flipped to the last page of my book, my interest was caught. I proceeded to read it from the last chapter backward, thoroughly invested in John and Edwin’s lives.

I’ve put off writing this review for a while, since my feelings towards this book are complicated and I’m not really aware of what my perspective on all of them and on the book is.

It’s a very “slice of life” story about two ordinary people – if you can call anyone ordinary – dealing with the struggles their lives present to them. Encountering the difficulties of a relationship, on both sides, and the desperation of their circumstances. Even the side characters – like Lordess Triumph, John’s employer/patron, have depth to their personalities and motivations. To what degree does Triumph believe that she really cares about the boy from the street who she helped make himself into a hired sword? Her experience itself, as a woman with stunted legs, is probably quite complex. To what degree does she care about John, to what degree is she deceiving herself, and to what degree is she knowingly invested only in her own interests, to which he is a tool?

She is a side character, and so these questions are never explored in depth, only hinted, but they whisper out of shadowed corners. But John and Edwin’s lives are gone into much greater depth, as John’s struggle with himself leads him to trying to be a hero – without regard to whether his heroism is really desired – to extortion, in a convoluted mess. And there are so many questions that could be asked: John takes a lot of risks and gets himself into real trouble being a hero, and he doesn’t succeed at making certain people’s lives better – they only get worse because of what he does. Understandably, justifiably, they are incredibly mad about it.

But is their reaction a part of what leads John down a dark path where he stops trying to do good and just does whatever he has to, to get himself as many parcels – coins, basically – as he can out of any situation? Is the fact they are only condemning, and don’t see the complexities of John’s intentions, a part of how John turns down a path where he does not look past the promised parcels to whether he is committing atrocities himself?

And is that dark path a path he must take before he can realize how very flawed and self-centered his motivations have been all along? Is it the only way for him to come to a place where he has the vision and the chance to actually choose to do better – to consider other people’s real needs and wants above his vision of what is best for them or even of what makes him the best, most glorious man, the hero.

Edwin’s perspective is artfully done. It makes you feel what he feels, get his worries, his concerns, the way his mind works. He feels so strongly, desires so desperately. He doesn’t ever feel things by halves. He doesn’t mean or say or do things by halves. And his perspective really brings one into how he means things, the constant concern about what others mean, the way he often just says things, or sometimes doesn’t, and the huge gulfs of misunderstanding between comprehension.

Here’s a beautiful passage explaining it:

Edwin moved his hands in small gesticulations, as if he was building a reality that only he could see. “And so, you just … keep using the wrong words. When you interact with everyone. And your sentences are always weird and messed up, and you’re pretty sure everyone is looking askance at you, but you’re never quite sure. Because … because … that’s it!”

“The culture! Not only does everyone speak fluent Gauthic, they’re a part of that culture, too! And you’re not, so you’re never sure if the way you’re behaving is okay. But people still don’t want to tell you when you’ve upset the culture. Or gone too far. Or shared or spoken too much.”

“I tell you these things all the time. What do you mean?”

“No. You don’t understand. Not to any appreciable degree. Because you’re never sure if it’s just one man’s opinion, or if anyone would be upset by what you’re doing.” Edwin was playing at panic. “And sometimes people will tell you something in fluent Gauthic, but you’re not sure which meaning of a Gauthic word they’re using. But asking for a definition is going to make them upset, because they’ll think you’re blowing something out of proportion ….”

“Imagine … imagine … imagine …” His voice rose as if he was building the momentum of his own thoughts. He stalked back into bed and threw his arms around John. “Imagine you can speak fluently in your own language, but there’s almost nobody else who speaks it. Nobody else is around to hear that beauty. You can speak whole stanzas of verse and construct the most beautiful poetry, but it’s not in Gauthic, so you might as well be speaking gibberish. There’s no one around who understands your language.”

And it may not be just John who tries to change things. There are so many layers and oppositions of the elements in The Sword in the Street. Edwin and a group of friends who some things trying to institute major change in their society … for the better. But – and at least they are aware of this – whether it is for the better or not, it is going to be very complicated, and it will have very complicated effects. Might it even be for the worse?

I loved the magic system of this book. It’s hard to explain – at least, I don’t know how to right now – so I’ll just provide a few short words from Aubrey – Edwin’s fellow university student who is studying the art of thaumaturgy.

I really enjoyed the – the openness of it all. The sense that there is something there, but it’s not something that’s understood very well – but it does deserve respect.

One thing that pulled me out of the book a little was the references to the ‘Nailed God’. It felt a little too taken off of Christianity for my personal comfort. That sort of thing grabs my attention and it’s hard not to hone in on that and make it a focus point, even when I don’t think it is supposed to be.

Additionally, I think I should note, there was a lot of references to and discussion about sex in the book, enough that even I noticed them, and found them to be a bit much. They were definitely a real part of a real story being told – not gratuitous – but if that is off-putting or otherwise something someone does not want to read, as interesting as this book is, it might not be the book for such a person to read.

2 thoughts on “Book Review: The Sword in the Street by C.M. Caplan”