Hello! Today we have noblebright epic fantasy author Rune S. Nielsen with us. In addition to being an author, Rune likes to draw, play fantasy card games, and he lives by a lake where he gets to observe swans and geese for his drawings.

Rune S. Nielsen is here to share with us a bit about …

We can call it noblebright or something else, but what’s important to me, is that at the core of my books are the promise that I have your best interest at heart, and the promise that I will do my utmost to make the story interesting and worth your while.

Can you tell us something about your stories that shows us how you fulfill that?

I promise to not leave you hanging at the end without at satisfying conclusion to a series. And to, at least on the surface, create a realistic fantasy world you can disappear into. To make the unbelievable believable.

I promise to create either unique or intentionally familiar worldbuilding (depending on the subgenre expectations and my intentions.)

I promise to always create nuanced characters that behave in intelligent ways. To show the reader the choices and the doubts as well as the solutions. To look at things from different sides, and to long for the possibility, that sliver of hope, that something good dwell in every one of us. Even the most vile.

I promise to make things difficult for the protagonists. I’ll shove the plot full of issues that the protagonists will have to deal with, and then I’ll go over it one more time and add some cool twists, a splash of humor, and see how I improve those action scenes. But never out of spite, just to make the story feel more believable and engaging. Let’s face it, a good book needs issues that the protagonist(s) must deal with. Unless you think that a 250-page plot about someone considering which socks to put on is exciting? I mean, sure, there could be a scene where someone finds it difficult to get out of bed and just lie there considering the socks in the drawer (if it fits the story/character,) but don’t hold your breath waiting for me to write it…

Escapism X Nuance, Hope, and Redemption – or at least the possibility of it! Sounds good 🙂

What’s a quote, a scene, or a theme from your book that feels ‘bright’ to you.

In my Artifact War Series, you’ll find quite several characters who are willing to leave important things behind and push forward against insurmountable odds to try and save everyone else. For instance, the young Mage Prince Phytiax who’s willing to forsake his birthright and go against the wishes of his family, including the emperor, and against his mage peers, and the military, by leaving his home in the south and travel to the cold north to try and do the desperate and crazy stuff he thinks is needed to save all of them.

Ooh, nice! I like that combination of elements! A prince who goes against what’s expected of him and his birthright … for his people!

In the interest of exploring the meaning of hope, courage, redemption, and other bright themes, it’s sometimes necessary to write some of the darker things in the world. What are some of the harder themes to tackle that you find, in books you’ve read or in your experience writing? How do you feel about trying to work through them?

I don’t write a whole lot about such things, but abuse especially of a sexual nature, that’s hard to read, and hard to write. It can easily get revolting when you read it. I’ve stopped reading books because of this or in some cases if I really loved all the other stuff, I’ve put them away for months. Though when I do come back to such a book, if the incident is not repeated, I usually end up feeling a lot for the characters and they do become more real in my mind.

As a writer, I feel very exposed when I go down those dark paths and so I tend to do it infrequently, and only when I think it’s really important to the story I want to tell (and I still feel guilty about it.)

That’s interesting! (I definitely think there’s a place for both – noblebright books that don’t really go that route, as well as books that do).

My childhood love of the classic noblebright fantasy stories led me to myself go down the same path as a writer.

How does writing stories about noblebright themes affect the way you present characters? Villains? Protagonists?

I recently talked to several readers who’d been kind enough to read my new book before its release. Arch of the Zhi’el as the book is entitled is number 3 in my Artifact War Series and it has several chapters where the bad guys are the main characters, and you get to hear their thoughts and see what makes them tick.

Suddenly, you find out a lot more like why they are doing all these terrible things.

My reason for doing this was mainly that I’m not a huge fan of “they are just evil.” I don’t like simple solutions or think that things in general are black and white. My stores reflect this, and I try to uncover the motives behind the character’s actions.

I usually always ask the readers I talk to which character in the book they liked to read about the most, and I was a bit surprised, but pleasantly so, to hear that this time nearly all of them said, Sulycan, who’s the main “bad guy.”

It gives me hope that readers don’t see him as a completely evil villain like they did earlier, that they might even find a tiny spark of possible redemption for him, or just detest him that little bit less.

Forgiveness, understanding, and the recognition that when he meets his end it was a human that died and not a monster.

That’s beautiful! I really like that, and I think that sense that even the worst villains have that spark that makes them human and can be redeemed – that’s one of the best things about noblebright to me.

I don’t think much about it really, it just comes naturally. As you might imagine I don’t go out of my way to create bleak, dysfunctional worlds full of nastiness. I create societies that makes sense as they are built by people (not necessarily humans) that would like to be alive tomorrow, and to see their children thrive. So even if the setting is rather bleak, I see no reason why all the people should be bleak, too.

Thanks for sharing that with us … I think Rune has some things to say about himself still!

You wanted me to say a few words about who I am. Well, besides writing epic fantasy books, I’m also a journalist and I love to play card games mostly of the fantasy variety.

And I like to draw. Here is a picture of a swan I drew inspired by the real thing. I used the image as a vignette in one of my books.

I’m fortunate to live near several lakes, and most days I go for a walk. Lots of swans and geese there 😊 The fresh air and beauty really help to keep my mind fresh and write better.

My unconventional living arrangements might also be of interest. I live in a cozy house-share on the outskirts of Copenhagen in Denmark. I spend my days with my wife, our Ragdoll cat, the heroically fluffy Mr. Muffin, and the other denizens of the house-share: one of my oldest and best friends and his extended family. We eat together though not every day, but I cook for us at least once a week. And we talk and try to help each other out with all the day-to-day stuff.

What they foresee will shatter this age 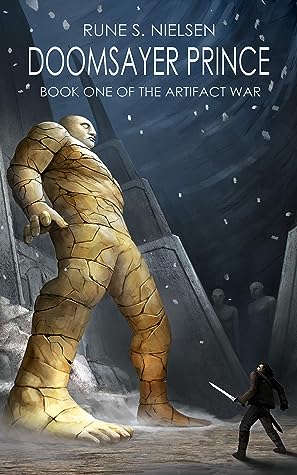 In his vision, colossal artifacts stride across his homeland, destroying everything in their path. In a desperate attempt to save his home, Mage Prince Phytiax heads to the wild north in search of allies. On his journey, his magical powers become damaged at the worst possible time, and his destined allies need to be saved before they can help him: Pino, the weakest Mage of all time and wielder of a mysterious artifact sword; Emilai, a kidnapped noble woman—turned Witch to fight her captors; and Cordin, an old Light Master, wanted for murder, but dead-set on getting his life back. With the brutal and mysterious force invading and destabilizing the surrounding kingdoms, will his potential allies help or hinder him? And even if they save their homelands, the price might be worse than they ever imagined.

Find out about Rune S. Nielsen’s new series, The Tales of Kjeldale here.

Get any of Rune’s books for yourself here!

If you’re a fan of noblebright fiction, or you’re another noblebright author, feel free to check out our Discord: The Noblebright Alliance. You are invited!

One thought on “A Human, Not a Monster: Author Interview with Rune S. Nielsen (Noblebright Spotlight)”