This week’s SPFBO 8 Author is Rune S. Nielsen! We had him here only yesterday for a Noblebright Spotlight, and he’s back again today for one with more of a focus on the Self-Published Fantasy Blog-Off! This is not Rune’s first time in the Blog-Off, but it might be his last for a while. With that, let’s introduce you to …

A Company of Adventurers 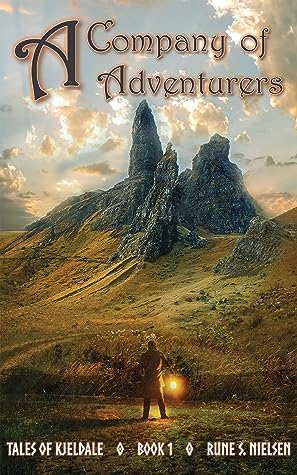 What happens to legendary adventurers when they retire?

Talen is a poor farmhand…but he used to be a famously quick swordsman. Now he has one last job, which could secure his family’s future: he must retrieve a cursed suit of golden armor from a mountain claimed by genocidal orcs. When Talen fails to return from his adventure, a motley crew of rugged ne’er-do-wells must deal with the mysterious person who hired Talen, as well as a family of berserkers. And retrieving the armor will take a grievous toll…Discover the fantasy kingdom of Kjeldale, featuring a world inspired by Norse and Celtic mythology, rich with bittersweet nuances and dry wit.

Author Rune S. Nielsen, who previously wrote the acclaimed novel Doomsayer Prince, is back with a fun but layered fantasy novel for every roleplayer who’s wondered what happens after heroes become legends.

I like this style of cover! And that is a neat premise.

So, now the Questions!

While writing my first book someone told me about self-publishing. And the more I researched the subject, the more I liked the idea. I never tried to go the traditional route; I just went straight to self-publishing. I enjoy writing my books, creating the covers, and doing the stuff on my webpage. I can live with the layout issues and with all the social media stuff, but I’ll probably never be very interested or good at all the marketing and sales stuff (while I like to talk to people, I don’t like to sell myself.)

That is … relatable! And as might be obvious, I love creating covers and running a webpage as well. Well, not quite all of it, but in general? 🙂

Last year I entered Doomsayer Prince in SPFBO#7 and yes, being in that competition was stressful.

So is any review for me. You actively ask other people to put a value on something that came out of your mind, something that you spent a lot of time on and did what you could to make as great as you could. Even if people completely love it, I always mostly see the flaws, and then sometimes they don’t like it…sigh, yes, that can hit you pretty hard.

When I entered in this year’s SPFBO#8 with my latest book A Company of Adventurers, I did so to try and get some more exposure on my new book and to do some networking. However, I entered with low expectations. Both were number one in a series and they both end in cliffhangers, so even should the judges like them (as I was fortunate, they did) neither are really competition relevant.

You’ll want to write books that are a one finished story, well edited, solid, and judgeable, at least if you want to go far in a competition. I learned that last year.

So, this year, I had no expectations, and I was just happy that the judge wrote twice in the review that he really liked A Company of Adventurers. And it’s not cut from the SPFBO yet, still, I expect it will be very soon.

I’ll never join the SPFBO again with a book, not unless I write a stand-alone book. And for now, I’m a series writer, and I don’t do stand-alone books (or at least I haven’t done one so far.) Also, some of the readers I’ve talked to liked one of my series much more than the other, so one of the things you must understand is that taste differ a lot. And while my books are not a good fit in SPFBO I’m sure there’s an audience somewhere, if I just keep looking.

If you think about it, sometimes slightly negative reviews can attract readers (it’s happened to me as a reader before), so there’s that! … That is the real trouble, isn’t it: looking and looking and hopefully someday stumbling into the dark onto that audience!

When did your love of books begin?

I’ve loved fantasy since my mother read the Hobbit and Lord of the Rings aloud when I was a kid. But I like lots of other genres too, like biographies, spy stuff, and science-fiction.

When did you start to have the wish to become an author?

As a young man, I decided I’d write my first book before I was 18. I had these great ideas. One was for a LitRPG novel (way before the genre was a thing,) an epic fantasy about gods and elves, and a science fiction book taking place in a dystopian Copenhagen following WW3 and ecological collapse.

How have you found the process for becoming an author?

Well, I can tell you that the beginning was like a naked trek across a twisting path covered in barbed wire. I was in a car accident when I was 17, came close to dying, and spent years finding my way back. Since I initially couldn’t work for long periods at a time, it forced me to forget about book writing…for a long time.

Instead, I focused on what I could do. I got better and began to write short pieces in magazines about roleplaying games and computer games, and it was this “fun stuff” that eventually led me to university where I got my bachelor’s degree in Journalism and later to many fun jobs like being the editor of a small newspaper, being a reporter at Channel 2 TV news, being the Editor in Chief at Denmark’s biggest webpage, and ending in communication roles at major corporations.

Still, the dream of writing books never left me, and one glorious day, my life, sorry I mean to write my wife, allowed me to follow my dream.

And so, we sold the house, moved into a house-share and I began to write full time, releasing my first book in 2020. I was 50 years of age…not 18. And this December, I’ll publish book number four.

Congratulations! On Book Four … and on your dream! It’s never too late, if you don’t believe it is!

What would you say to those wanting to become an author?

It’s never too late, but it’s a lot of work to write a book, so you’ll have to really want it.

What do you love about the writing/reading community?

That you can find likeminded individuals whether its readers or writers. Being a writer can get lonely, all that sitting by yourself writing. It’s important to find others to talk to. This doesn’t have to be your readers or other writers, but it’s always interesting to talk to people that love the same things you do, and when you get to know readers who like your books it feels like getting that Christmas present you really wanted, and you can always learn something from other writers, and not only those with more experience than you.

As an icebreaker I do interviews with fantasy authors. ( https://runesnielsen.com/author/author-interviews )

I’ve also created a free guide about how to publish books yourself. ( https://runesnielsen.com/author )

And a lot of people regularly find the articles I write about for instance AI art. ( https://runesnielsen.com/news/2022/8/18/ai-art-and-why-its-a-whole-new-game-with-stable-diffusion )

If you could say anything to your readers, what would it be?

I know I “always” write books that end on cliffhangers…BUT don’t worry! All my series will end on a positive note. You do not have to worry about that.

That is good to know! Also, in case of encouraging me to wait until you have a number of books in a series out, because if I love something AND it ends on a cliffhanger, it can get kind of annoying …. It doesn’t matter if I didn’t care for the book that much.

Where can people connect with you?

And you can check out his SPFBO 8 entree A Company of Adventurers on Goodreads here.

Or you could visit his website where you can find all Rune’s books.