Poison from a Scorpion’s Sting 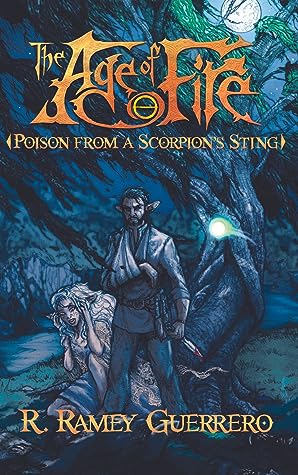 Book Description:
The Nez’kali has failed.

Slate’s actions are to blame. Without Adahai to advocate for fire’s return, no one protested in the streets. There is only one day before the Age of Fire, and the Nez’kali is near death and under the scrutiny of the Council of Elders. Can Slate convince Wasii Pon Ruwa that Nokhum is not a danger to the people?

I received a free e-ARC of Poison from a Scorpion’s Sting. This has not affected my review or rating.

Poison begins just a few days after where Dust leaves off, with Nokhum deathly sick and under the scrutiny of the elders for pretty much anything they can come up with to try him for. One of the things I really enjoyed – in keeping with the tone set by Dust – is how close and immediate Nokhum’s perspective is. This is a story that follows the hours and days of his life, the minutes and the wakings, the fears, thoughts, confusion, exhaustion, excitement. He’s been poisoned by the sting of a deadly scorpion, and it’s a miracle he’s alive at all. And it is a terrifying experience for him. There are so many things he could be executed for, so much of the knowledge he keeps is forbidden, and now he’s had people in his own home. And the Council wishes to try him, and someone is spreading rumors that the poison will turn him crazy and dangerous. Meanwhile, he’s ailing and exhausted, and nothing seems to do more than keep the poison at bay.

I really like how closely Nokhum’s perspective is kept, never letting the reader forget his feelings in a way that really works with the flow – his exhaustion, his fear, his panic at being tied up in a cocoon, the guilt he feels over attacking Rysidian, his wife’s sister and healer, while he was unconscious and she was trying to see his wound … any of it. We also get to see more of his memories of his lost life-mate, Kiicatia, and it is making me really want to meet her! Her personality comes across so vividly in the dreams and hallucinations Nokhum has.

Relationships continue to be explored, deepening them. Nokhum’s relationship with Atnu continues to develop, as Atnu tries to keep a stubborn Nokhum from ruining things, and struggles to come to terms with the fact that his most sacred beliefs aren’t so certain anymore … and he has betrayed them for Nokhum’s life. Something he will never regret, but something that has a cost he hasn’t begun to imagine and will have to face and endure. At some moments, he is remarkably ready to embrace the new vision of the world, unhesitatingly trying to learn how to practice minor magic like making light orbs, but it’s still a long struggle that’s not over quickly, to reconsider everything he’s been taught.

She might not speak to me.” His friend snorted as he packed his bundle. “I told her I wouldn’t use Imbyr’s spells. I lied.” There was a pang in his heart when he thought about the possibility of Willow turning him away. Casting him aside. But he knew he took that risk when he invoked Fire.

And how Willow feels about Nokhum …

They never should have taught you those things!” she nearly shrieked. When she reached to grab him, he flinched. Taking a deep breath, she folded her hands. “They’re only holding onto legends. And the people who hold on to those old traditions fall into the Shadow’s grasp,” her voice cracked. “Ever since the day I found you and brought you here to be with me, I’ve always only wanted to protect you.”

She’s only lied to him to protect him. Yet her lies have hurt him and hurt their relationship. They are so sweet together, and I can visualize Willow so well. Her protectiveness is so strong, and there are moments when all I want for Nokhum is what Willow does. I really like how their relationship is treated, and other things as well. To mention another, Atnu is interested in Roana, a Yerikuu silk spinner. She belongs to a tribe that’s generally not well-regarded, while he is the son of the high priestess. Yet she has a freedom in her designs that he doesn’t have in what is demanded of him, and so he feels some envy for her way of life.

As this series progresses, the relationships are getting deeper, not in a way that twists them around for the sake of “stuff to write” but in a way that fleshes them out, providing more context and understanding.

The world-building isn’t left behind, and we get to see more of Nyara and her fox Tokala, the otherworlders from the Painted Realm. Nyara is devious, with complex motivations. I expect their surface has not yet been scratched, but she does not seem malignant.

As always, I really enjoyed Xiilena’s – the woman with the orphans who spy – sections. She just has a personality that really draws me in, and lots of secrets of her own. It’s hard to describe. She is so strong and tough and determined, and her life has been intertwined with Nokhum’s for a long time.

Perhaps, my complaint about this book is that whenever I’m reading one point of view, I don’t want to read the others, I want to just keep reading that one, and then go back and read the others! Which isn’t usually a problem for me when I have a physical book, but when I’m reading an e-ARC it got just a little annoying – but I don’t consider it a flaw in the book, but the format!

The political side of things is not ignored. We get to see more of Atnu and Nokhum’s partnership in how they deal with the Underling Prince when he comes to visit Wen, and also of their great frustration. Nokhum is both delightful stubborn and often the mind behind much of what they do – not that Atnu does not think – but that Nokhum is never allowed to have that place. He is Atnu’s scribe, the highest a lowly Yerikuu can go. We also learn more of their backstory, with glimpses here and there of what they’ve done in the past, that really flesh out a complex history and the kinds of thoughts and questions Nokhum asks.

The Prince’s words were true, and that’s why they hurt. As a child, Nokhum wanted for nothing. He kept to himself, and the forest looked after him. They taught him how to survive. But when Cat found him in the woods, her family gave him a new name and anew life. They planted a dream within him to become someone worth admiring. Someone who had influence to stop the injustices he witnessed daily. But it was all a lie. One to motivate him to work hard.
To read everything. In the end, he could only ever be a scribe.

And something Willow says to him:

Spinners wove their tales into spidersilk, but they were wrong,” as she spoke, she pushed back his uvut to weave her leaves into his braid. “You were more than they thought you would be. So now your survival marks an unraveling. One that started long before Atnu put that flute to his lips. Before Adahai perished. Before those books came to you…” She kissed the top of his head. “Child of dust, all I want, is for you to walk your own path.”

Review for Book One, Dust of a Moth’s Wing