Hello! I’m doing author spotlights for any interested authors who entered books in the 8th annual Self-Published Fantasy Blog-Off, regardless of when or whether their entrees have been cut. (Contact me if you haven’t done one and are interested).

Today, we have Tatiana Obey and her novel, Bones to the Wind, with us. Tatiana writes diverse fantasy about badass characters. She has a new release coming soon – and a 99cent sale on Bones to the Wind in preparation for that, so without further ado, let’s introduce you to …. 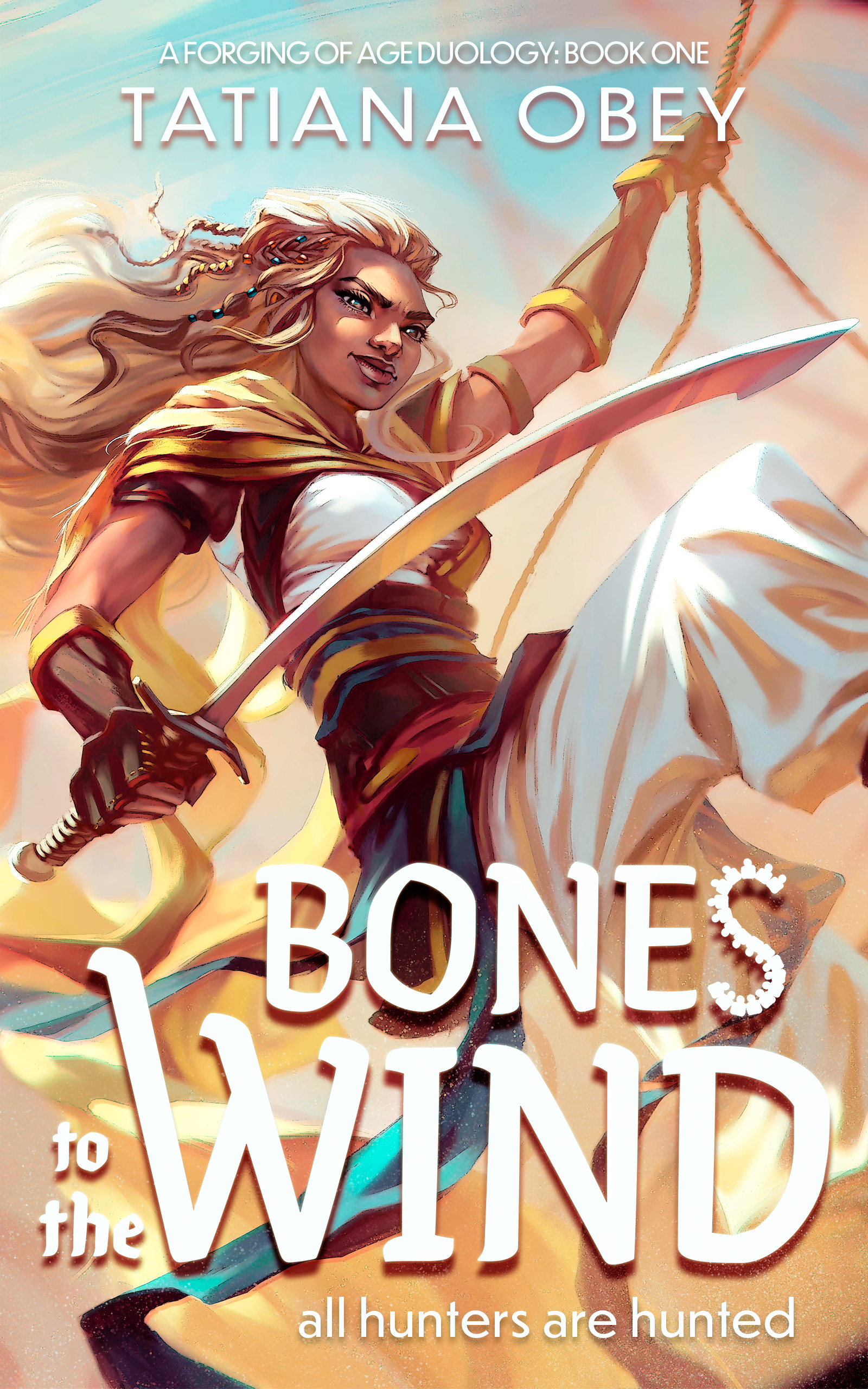 Rasia is determined to destroy her old man’s record in the Forging, a trial each child must succeed to come of age. All Rasia needs to do is hunt down a gonda, hitch its tentacle ass to her windship, and haul it back home in record time. Easy. Or it would be if Rasia wasn’t stuck on the same team as Nico—a know-it-all, spoiled, grubworm who never does anything Rasia tells her to do.

Nico doesn’t care about Rasia’s egotistical dreams of glory. This is her brother’s last chance to pass the Forging or her father is going to banish him from the family. She needs to scour the desert to find whatever team the bones placed him on and help him kill a gonda before it kills him.

Too bad Nico and Rasia can’t get along to steer a windship straight.

BONES TO THE WIND is a coming-of-age sword and sorcery fantasy adventure. Action-packed and humorous, the novel includes strong female characters, LGBTQIA+ representation, and mature themes.

With that, onto the Questions!

At first, I tried the traditional publishing route, but after failing to query two different stories, I began to realize that the stories I write do not fit neatly into traditional publishing. In order to succeed, I would need to cultivate my own audience and I decided that self-publishing would be a better fit for me. Additionally, I am a perfectionist and I love having control over every aspect of the publishing process.

I had written the first iteration of my SPFBO entrant, Bones to the Wind, in high school. When I decided to self-publish, I knew that I wanted to debut with the characters that I created as a teenager. I crafted a better plot around the characters, strengthened the themes my teenage-self struggled to convey, and it became a story that metaphorically reflected my experiences coming-of-age as a black woman in America. It is a fun action and adventure epic fantasy about growing up.

I think a lot of us are perfectionists! And I love that you wanted to debut the characters you made as a teenager. That’s just so … perfect.

Why did you enter the SPFBO contest? A number of people have related that they find it pretty stressful. How do you feel about it so far? Or has it not affected you much?

SPFBO was undoubtedly stressful. I had told myself that I would submit the book and forget about the contest, but instead, I found myself following every review posted. Despite all the anxiety-induced stress, it was a great opportunity to learn about other indie books and authors. Thus far, I have read several indie books entered into this year’s competition. I have found several that I have enjoyed thus far, and it is great to see how varied and niche the fantasy genre can be.

It is pretty cool! I found some of my favourite indie reads the first time I entered SPFBO!

Book titles. Why did you choose the title, Bones to the Wind, for your book?

The novel is about a coming-of-age competition where teams of children must hunt down one of the colossal creatures that populate the desert in order to become an adult. The meaning of the title, Bones to the Wind, becomes immediately apparent within the opening chapter where a ceremonial bone toss determines the upcoming teams. This society puts a lot of stock in fate, but one of the main characters, Rasia, is determined to take fate into her own hands.

I like that. A lot of stock in fate … determined to take fate into her own hands! And I love the imagery of the title and its meaning!

I won’t ask for your favourite scene since I know some people don’t have those, but can you share a scene you really like and you just can’t believe how awesome it is every time you go back to re-read it?

I love writing fight scenes, and I’ve perhaps written one of the most inappropriate fight scenes ever. The characters involved are scrappy, prideful, and care about each other a lot. The fight scene is representative of the novel as a whole—violent, kind of sexy, and completely unapologetic.

I think this is a “quarrel” scene not a “we’re fighting to hurt someone” scene? 😀

Same sort of thing as with the last question, except this time what about a quote? One to five lines or so, but this isn’t math.

Nicolai walked the bowels of the Great Elder, where livelihoods pumped through the back-alley veins, rooftops, and side streets of mud-brick buildings. Vegetation flourished and thrived in the shadows. Incense breathed around every corner, and the water pumps gurgled when it rained. Sometimes, on a clear night, Nico could hear the marrow sing.

I’ve always loved the poetry of this paragraph. In the novel, the primary society lives within the bones of an enourmous dead dragon. This paragraph describes what it is like to walk through a city built inside a dragon carcass.

I love it! It’s so descriptive and evocative, with the words placed so … almost subtly. Like how it would feel if these is just the world to you, not strange and exotic.

What would you like to share? Take this in any direction you consider to be related to your book and your writing.

The second book of the duology, Dragon Your Bones, releases on November 1, 2022. One of the reasons I chose the self-publishing route is because the duology does not fit neatly into age categories. Many coming-of-age stories end when the characters become an adult, but the sequel is primarily focused on what happens after the coming of age. It is a duology that transitions from YA to Adult within two books.

In addition, I had initially written the entire duology as one, but it was too long, and I had to split it into two parts. Unfortunately, I think that also worked against me in the competition. It’s understandably hard to judge a story if you don’t know where it is going. Regardless, I sincerely believe that both parts together are the best representation of me as an author.

I love the concept of a duology that transitions from YA to Adult! Personally, if I may say so, I think that should be a thing? After all, people grow up!

Thank you for sharing all of that with us, Tatiana.

Tatiana Obey writes diverse fantasy about badass characters slaying dragons. She often finds herself occupied by the fantastical worlds and characters in her head. She used to teach English in South Korea and she also worked as a marketing specialist for a woman-owned law firm, until the pandemic, then she quit to write and travel the world. Learn more about Tatiana at www.tatianaobey.com.

You can get Bones to the Wind on Kobo, Amazon, and Barnes & Noble, or check it out on Goodreads or TheStoryGraph.

And here’s your reminder that Bones to the Wind is on a 99cent discount for the month of October, in preparation for the release of the final installment in the duology, Dragon Your Bones, on November 1st.

Other SPFBO 8 Author and Book Spotlights