Hello! Continuing my Self-Published Blog-Off 8 Author Spotlight and Interview series (more information about the Blog-Off on Mark Lawrence’s site here) we have Bruce McKnight whose SPFBO 8 entree is Forged in Flame, a story that includes nuanced orcs and characters who are fundamentally unsuited to what they have to do. 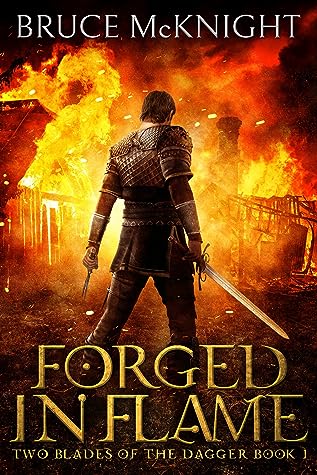 Danger closes in from every direction.

A mysterious black beast is leading orc tribes from the north on a rampaging conquest into the valley.

An ambitious orc chieftain in the east is uniting the largest army this land has ever seen.

And Tildun Logan is caught in the middle… alone and untrained.

When his village is destroyed, leaving him with nothing but the clothes on his back, a ceremonial dagger, and the heavy burden of guilt, he embarks on a quest of revenge and redemption. Tildun quickly finds himself caught up in an adventure bigger – and more dangerous – than he ever imagined.

Kings, armies, full-scale war – this is about so much more than just his village.

There’s no turning back, no home to return to. But with no sword and no training, can he ever set things right? Can he escape the weight of his guilt? More importantly, can he even survive?

And now, onto the questions!

Different people choose different paths for different reasons, but the choice was easy for me. I didn’t want to be in a situation where an editor could make me change something I didn’t want to change and I didn’t want to get stuck with a cover I didn’t like. I get to decide how to implement my editors’ feedback in a way that stays true to my vision and I don’t have to write to a publisher’s deadline – I can take as long as I need to to get the story as close to perfect as I can make it. I don’t want my readers to get something I rushed. I’ve found self-publishing to be the right choice for me and am glad I chose that path.

Everything here speaks to me so much! Not to mention, I have no idea how anyone writes anything that even resembles a book if they’re rushed. Cheering you on, Bruce!

I’ve enjoyed following SPFBO in the past and saw it as an opportunity to connect with more readers and writers. I’ve definitely found it more stressful than I thought it would be, but it’s forced me to think about writing and publishing from a different perspective. Judges have unique tastes that can make or break a book… so do readers. It’s been a great learning experience.

Yes, this world is full of unique tastes. Including our own!

The name “Two Blades of the Dagger” was the original title. Yes, there’s literally a dagger with two blades, but the story is meant to explore the duality of man as well as their relationship with orcs, who are also highly-nuanced creatures. As I got farther into working on the sequels, this felt like a better way to describe the broader narrative, so it became the series name. “Forged In Flame” (the title of this book) signifies that the conflict set in motion for this series is strongly forged (and yes, it also literally includes flames).

Oh skies, I love this story behind your titles! And, on a side note, the ‘Two Blades of a Dagger’ is personally funny to me, since when I was a little child, I thought that was what a two-edged swords meant, and that all swords were what, in fact, is meant by ‘two-edged’.

The thing I like about my POV characters is they aren’t suited for what they’re called to do, but they can’t avoid it – they need to figure how they’re going to navigate a life they hadn’t planned for. I write for emotional impact, but, as the writer, I’m usually numb to most of it… except when the waterskin gets dropped… that scene still gets me every time…

I can imagine so many ways a waterskin getting dropped could be … umm, uh, impactful. I like the idea of main characters who aren’t suited to the circumstances they’re thrust into!

“Last night I was drunk.”

Jerol snorted. “Wouldn’t be so sure.”

LOL. And this just reads like the kind of thing that means a lot more if you know the characters. Thanks for the interview, Bruce!

Here’s what Bruce has to say about himself:

I’m just a dude who likes to write fantasy.

I’ve loved fantasy since I could read. Writing grew from my love of reading and I’ve been writing fantasy for over 30 years (I was a nerd before it was cool). I grew up on the orc, dwarf, and elf tropes. These are classic elements of fantasy, but I hate the generic way they’re still used in a lot of stories. I try to write them as distinct, cultured, emotional individuals and they form the backbone of my novels – a new take on classic epic fantasy.

You can find Bruce on:

And you can buy his book, Forged in Flame, from Amazon or check it out on Goodreads.