Hello. I’m back again, this first Wednesday of July, with another Self-Published Fantasy Blog-Off 8 Spotlight. This time, we have Helen Rygh-Pederson with her SPFBO 8 entree, Waking Ursa Minor, and I don’t think she confirmed that for me in so many words, but I’m guessing there’s something to do with stars or constellations in there. 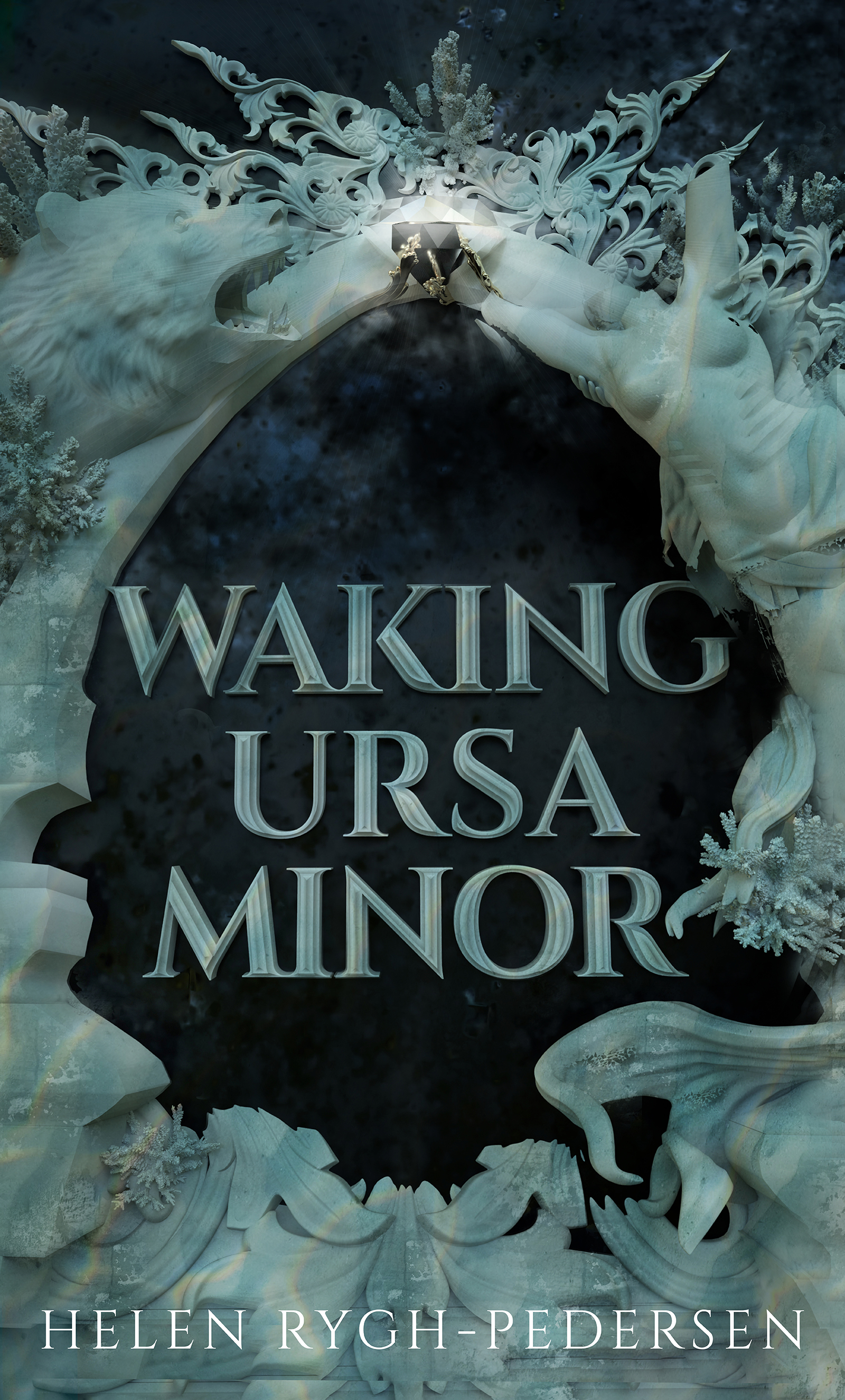 As Gesland swelters in extreme heat, Serakela watches the nomadic Clans make their way across the plains on their annual pilgrimage and resigns herself to the monotonous life of servitude at the institution which raised her. But Serakela is not the orphan she always believed herself to be. On the night a crazed assassin tries to kill her, her heritage is revealed catapulting her into an island-hopping fight for survival, and the search for the fabled Stone of Riverda.

The sundered islands of Riverda are dying. The earth magics that protected and sustained them before the Rivening are unbalanced; dwindling in some areas whilst stifling others. As time runs out and tensions rise, countries teeter on the brink of war, starvation and extinction. A way to save them has just arisen from the realm of rumour but Brother Okrafkus of the Separamus cannot allow this to happen.

Not only will Serakela’s quest lead her to her long-lost family, rumour has it that she who wields the Stone will restore the islands of Riverda to their former glory. Rumour also has it that in doing so, she will unleash the evil that split them.

I haven’t read a lot of blurbs that start with ‘As ___ land swelters in extreme heat’ so that’s definitely new!

Anyway, onto the questions!

When I actually started considering publishing my book, I knew that times had changed and that traditional publishing was not the only way to go anymore. I did lots of research and had pretty much decided that self-publishing was the way I wanted to go, to keep hold of the control in the process and publish the story I wanted to tell. However, my developmental editor thought I should try querying as he thought Waking Ursa Minor had potential for the traditional market. I was a bit dubious about this, but did it anyway. Well, after 6 months of hearing absolutely nothing (whilst perfecting the rest of my book) I knew that my gut instinct to self-publish had been the right one, and so was very happy to continue along the route I had initially planned on taking.

Sure, it has been somewhat pricy, with the edits and cover design etc, and a lot of hard work but I know in the end I have the book I wanted.

Also, the self-publishing community is amazing! It has been nothing but supportive and I am not sure I would have had the same experience along the traditional route.

There’s nothing in the end like the feel of knowing you have the book you wanted.

I discovered SPFBO about two years ago via YouTube and thought it was a pretty cool thing, so kept an eye on it. Last year I was watching a lot more intensely as my book was nearly finished and I knew that I wanted to enter, partly due to the vibe that the judges, competitors and followers exude on the facebook group. It’s supportive, funny and friendly.

Now, I wanted to enter, even though the chances of even getting to the semi-finalist stage are incredibly slim, because it is a great way to get your book in front of people who are interested in self-pub fantasy and follow the competition, and as a way to meet other indie authors and also reviewers etc.

So far I’ve not been too stressed out, apart from the day of actually submitting, (the internet when out in our whole district and after hours of panicking as the deadline approached, I found out the only place that had it was my work, whose Wi-Fi was on a different system! Talk about cutting it fine!). However, I do find myself refreshing the Facebook group more than I probably should!

Ah, I certainly understand submission day stress! I’m glad you were able to find a work-around to your internet outage and were able to enter!

Well firstly, the title just came to me and I thought it sounded cool. No, but it does also link to a few different things within the book, some obvious, others with a more tenuous link, for example it is a coming-of-age story (or the start of that journey at least), so in that respect it is about the character waking up to the world around her. The other links…well you’ll just have to read the book and see if you can work them out!

Ooo this is a hard question. All my favourite scenes are far too spoilery so…. sorry, but I will say that I love them because they fall into the ‘emotional damage’ category and often make people cry. That makes me sound like a horrible person doesn’t it…..

There are a couple of characters who I really love (well I love them all and all their differences, but you know. I can’t talk about them all day). One of them is a woman we meet in the second part of the book and her name is Cheskia. What I love about her is her sheer strength and determination. I also felt very close to her at the time of writing as well, we had a certain age and life event in common, but don’t worry she is in no way based on me, she is way cooler than I am!

Who bases their characters on themselves? Well, perhaps some people do, but I certainly don’t make the ASSUMPTION that anyone does, lol. Cheskia sounds fun, and it also sounds like it must have been really fun to write her!

Again, such a hard question, well I guess there are a couple so you can choose.

The first it from the prophecy and is actually on the back of the hardcover:

As earths collide and oceans rise

“He’d expected her to fight for her life, plead with him, shriek and squirm. But as he held her face close to his, a solitary tear melted into the sea as she whispered again. ‘Do it…Kill me. It’s only what I deserve after all.’”

These are all so great! I can see why you truly didn’t choose, and I think together they’re really intriguing and create a certain feel. Thanks for sharing all three!

First of all, thanks so much for the interview, it has been great to chat to you.

It’s still such a thrill to be recognized as an author, even though telling stories is something I have been doing since before I knew the alphabet. Sadly, I let life get in the way of that dream and it has taken me a long time to remember what brought me joy as a child and that writing was the thing that made me come alive. But now, this year in 2022, my dream has come true with my first book Waking Ursa Minor.

Now, this is the first book in the Riverda Rising series. Riverda is a vast world and I have many other story ideas within it that aren’t always or directly linked to this main series. So, keep your eyes peeled for some “Tales from Riverda” in the future.

However, I don’t want to solely stick to this one world. I am absolutely brimming with ideas (I actually have a folder with half plotted out shiny new ideas that keeps calling my name) and have actually just started a side project that will be at least a duology in the fantasy romance subgenre and is a fairytale retelling.

I guess you could say my goal as a writer is to one day have a multitude of series under my belt and be supporting myself and my family with my writing. However, that is a long way off just yet, but every 500 words I write gets me closer to that dream.

I also keep toying with the idea of setting up an AuthorTube channel, but right now life is a bit hectic, so maybe in the future.

Thank you to everyone who has bought, read and reviewed Waking Ursa Minor so far. Your support is absolutely overwhelming. I like to keep an open, friendly relationship with readers, to don’t be afraid to follow me on Instagram or Facebook or sign up to my newsletter.

You’re absolutely welcome! It was great chatting to you! And, if I may say so, I love the idea of continuing stories in the world of the Riverda Rising series AND branching out into new worlds as well!

Reading and writing are two things Helen has been heavily involved with from a young age. She could always be found with her nose in a book, especially on long car journeys, or with a notebook in hand.

After a brief career teaching languages in the UK she moved to Norway with her family where she reignited her passion for creating worlds.

When she isn’t planning and writing, or spending time with her family, she can be found knitting, sewing, and of course, reading.

You can find Helen