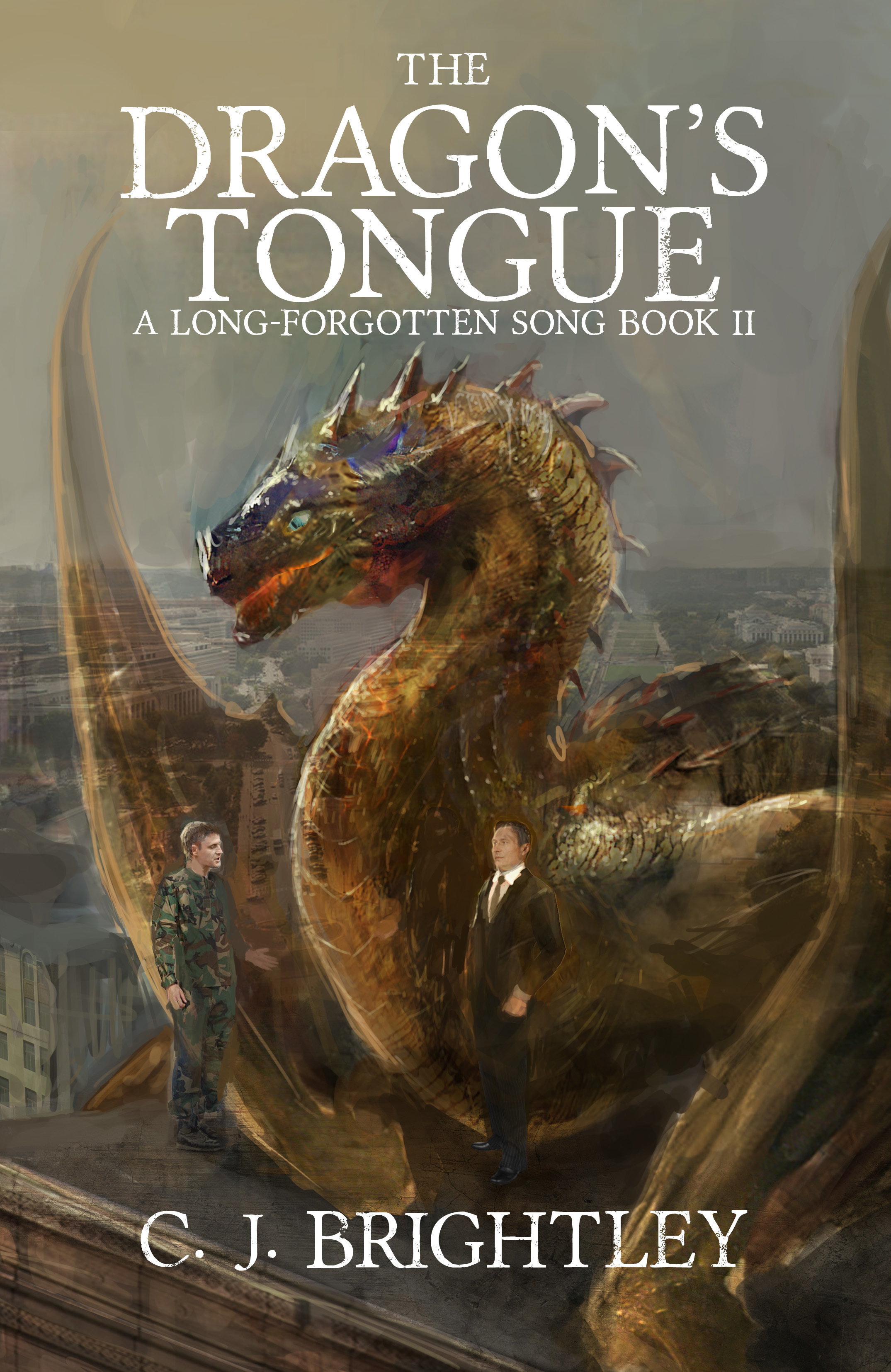 While hiding with Lord Owen, the Fae, and the human resistance, Aria is forced to question everything she thought she understood. What are the Fae? Who is Aria herself?

More than refuge, Aria needs answers. Despite the appeal of Dr. Bartok’s talk of grace, the Empire’s darkness threatens to overwhelm Aria as she wrestles with questions of sin, justice, and love.

Colonel Grenidor has his own questions as he makes a new powerful ally. How much can Edwin really be trusted? And what of the Slavemaster, who Edwin claims is an ally of the vampires opposing the Empire? Colonel Grenidor’s research on the vampires has grown increasingly dangerous, with consequences for the Fae, the vampires, and the supernatural entities on both sides of the conflict.‘

The Dragon’s Tongue is unmistakably far more theological in tone than Things Unseen and unmistakably Christian. But something I really enjoyed about it was where that focus lies and seems to lead. Some of the characters have a very theological bent, and can be quite preachy, but underneath it all there is a strong leading that sings to me.

Owen murmured, “And yet, do we not doubt El’s character by persisting in the belief that he offers grace to humans and not to us?”

(To explain a bit of content, the Fae have a knowledge of what they are and are not allowed or commanded to by El/God, and as long as they obey, they experience fellowship with El and with each other, but if they disobey they instantly lose that sense of communion and become wretched, and they believe there is no way back for them.)

While none of the characters venture to believe this, the implication is strung throughout the story, in many places, that was is wanted is to trust in God’s character, and in his love. That one may not know all things, but trust in God’s character, that he is good – that he loves, is love – is what’s important, and believing in the rules that one has learned define God’s relationship to one can be an impediment to that.

For this is what is forbidden to Fae, not killing in self-defense, or perhaps even in vengeance, but the judgment here:

There is the strong implication that trusting in God’s love, believing in love, is more important than our ideas about holiness. That the obedience that God requires is to love: to care for the well-being and the happiness of those that are loved.

This is something I so rarely see out of Christian writings, that my heart soars at seeing the implication, at the direction this seems to be leading: that no one and nothing is outside the possibility of God’s mercy, of turning back to him through grace. That even the things that most Christians might teach are barriers, boundaries beyond no repentance is possible, are not barriers to the love that never fails. That there is no creature and no place where hope and grace cannot reach.

Something else that I found very interesting and enjoyable was the depiction of what appear to be supposed to be angelic beings. One of them is definitively interested in the question of human love and what love means, how it is or is not important, as a being who doesn’t understand love at least in the way humans or Fae do, and I very much enjoyed this. It’s a depiction of other beings with interests and personality who can learn and want to learn, but who are very, very, very different from us in so many ways that understanding where they’re coming from or how they see the world is more or less impossible, but who are still persons, capable of growth. I really liked seeing that representation. And there were several things that, combined with the discovery that Fae can be redeemed and the interests of this probably-angelic being that naturally suggest to me that the question: can fallen angels return to God? is something that is being raised for consideration.

I will not say it suggests universalism: I say this simply to be clear, because I think a lot of people will perceive ‘Repentance may be possible after death, or for creatures other than man’ to be the same as ‘all will be saved’, but whatever you may or may not feel about universalism, it is a separate topic, and the former does not imply the latter.

However, the book did not live up to my fullest expectations in other ways. The characters are relatively flat. They do not act in contradiction to who they’ve been previously established to be, but there isn’t much depth and vibrancy to their personalities. They feel like they’re made in order to make the story and its theological points work out. A little like caricatures. Or like the characters are the setting.

Other issues aren’t approached with the nuance I would have appreciated. I don’t know if I can expect them to be treated in the next book, or forgotten about altogether, as there were some things that were suggested to me as being very cool things to explore in Things Unseen, that are completely ignored here. Something I found a little annoying is the notion that animals are essentially nothings, with no soul. I felt like the setup with certain humans torturing Fae for experiments and justifying that with the belief that Fae are animals could lead to some interesting exploration of certain questions and themes, but that side of things was completely ignored. Among other issues that could, I think, have been explored in a way to add more depth and richness to the main thing – calling it a “plotline” does not seem apt, as The Dragon’s Tongue has rather little plot (to be clear: the lack of a plot is not something that disappointed me; I like books with no plot just fine.)

Review for Book One: Things Unseen