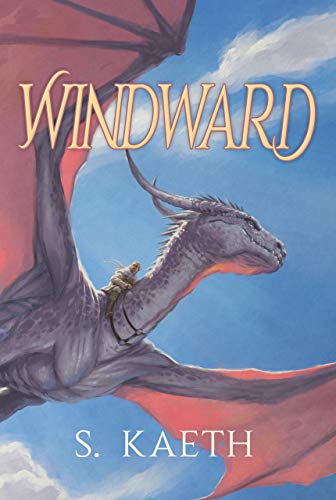 In nests high in the mountains, dragons and dragonbonded share their lives, thoughts, feelings, and ambitions.

Palon and her partner, the dragon Windward, are renowned among their nest for their flying skill. Their days are filled with everything she loves, especially riding the wind. Even being tasked with teaching their way of life to Tebah, a rebellious newly bonded teenager, can’t bring her down too much.

But when treasures from the dragons’ hoards are found in Palon’s collection, her idyllic life comes crashing down. She battles to prove her innocence, while her every move is cast as further evidence against her. Tebah’s suspicion, homesickness, and defiance would be frustrating even in easy times. With Palon in the spotlight while her rivals smear her name at every turn and stir up plots of revenge, her teenage charge’s behavior proves dangerous.

Dragon tempers shorten, and challenges and disputes shake the ground. Palon will have to trust more than just herself if she hopes to once more own the sky.

Note: This is a re-post of an old review, with some added content.

I’ve been looking for another good dragonbond story for a while, as those are one of my stable favorites, and I was more than pleased with Windward by S. Kaeth.

Palon has been bonded to Windward for a decade. She and Windward excel at fighting the walavaim, winged creatures a little like dragons (though I think the dragons would think otherwise; the walavaim are thieves) who inhabit the realm to which the dragons Shift to sate themselves on the herds they keep for that purpose. Palon and Windward are a little reckless, and a perfect team, with a very tight bond. Another dragon, High Flight, takes a bonded even though there are a number of reasons why it is not the right time for him to do so, one of them being that an older dragon named Silver Spine is dying. The new bonded, Tebah, is assigned to Palon and her mate, Aturadin, to teach the ways of being dragonbonded and to help her to strengthen her bond with High Flight in this already telepathically-stressed situation. She poses a great deal of difficulty, being rebellious and stubborn, uninterested in being bonded, and they have to live with that and figure out why. Then items start disappearing from some of the dragons’ caches, and things rapidly spiral lower and lower, with the addition of another plot twist and an unexpected danger.

I loved Palon’s and Windward’s relationship, as well as Palon’s and Aturadin’s relationship. Both the humans and the dragons have such true personalities and living relationships. They feel like real people. I really liked how Palon and her mate love each other and are loyal to each other. Palon is the most dragon of the bonded, and Aturadin the most human, and this might be part of why they are chosen to help the new dragonbonded. The dragons affect their bonded incredibly strongly, but the bonded affect their dragons, too. The bonded become territorial and possessive, adopting dragonic body language, and developing a need to collect treasures and never let anyone even think about taking them. The dragons and the dragonbonded are very possessive of their partners. It felt so natural, so real.

Another thing to note that I enjoyed in this book is that the character development isn’t about the characters changing, per se, but about showing us who they are, even if that is a stubborn (or oblivious) refusal to change. Palon wants to be the way she is. It’s what’s natural to her, and I liked how she keeps on repeating the same behavoir patterns, even when they don’t work, because that’s who she is. People can be slow learners, even when they want to. And some people don’t want to; Palon barely even recognizes that the ways she behaves can be counterproductive. And I liked that. It’s one of the ways the characters feel real. This was a really neat character and dragon novel.

In the midst of the chaos and suspicion among the dragons and the dragonbonded once the thefts start to occur and an old rivalry is fought on an entirely new level, one of the dragonbonded reminds Palon something to the effect of, “We are family. Do not think of the others as ‘Other’ but as family.” I really liked that. It is so true and necessary.

Once again, I really loved the love and loyalty and care between Palon and her mate, Aturadin, and I really, really enjoyed her dragonbond with Windward and how she and Windward fight together and live together and are possessive towards each other and – everything!