Of Blood and Fire 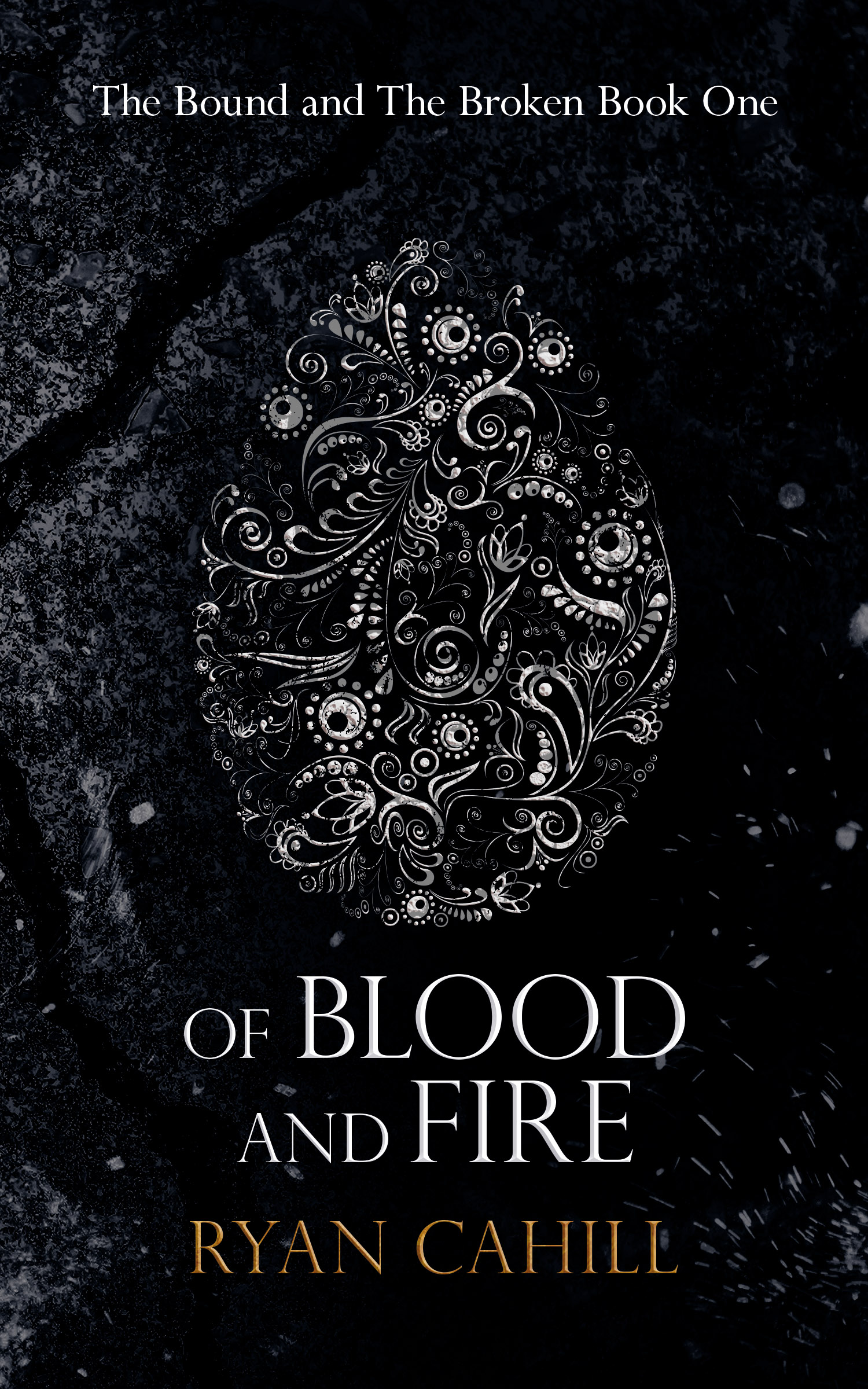 Series: The Bound and The Broken, #1

Born in fire. Tempered in blood.

Epheria is a land divided by war and mistrust. The High Lords of the South squabble and fight, only kept in check by the Dragonguard, traitors of a time long past, who serve the empire of the North.

In the remote villages of southern Epheria, still reeling from the tragic loss of his brother, Calen Bryer prepares for The Proving – a test of courage and skill that not all survive.

But when three strangers arrive in the village of Milltown, with a secret they are willing to die for, Calen’s world is ripped from under him and he is thrust headfirst into a war that has been raging for centuries.

There is no prophecy. His coming was not foretold.

He bleeds like any man, and bleed he will.

All right, so I could not remember the words I wanted for that, so I had to make some up, and it sounds kind of weird, but I’m still happy whenever I’m not using star ratings or something like that! So we’ll get to those.

Let’s see. Of Blood and Fire starts slow, with a lot of time showing Calen and his friend’s lives. Their world. Their characters, and those of their friends and those they come across. One gets a good grounding in what life was like before, and a view into their dreams and aspirations, their fears and worries, and their personalities. One sees Calen’s family living with their wolfpine, Faenir. His bond with his sister, how his different friends respond to the test and fear of The Proving, and how they go through it together. Their sense of fun, Calen’s impulsive decision to protect three men who are mostly strangers to him from the imperial guard, his feeling when he kills a man … and how his impulsive acts lead to the death of his parents and the destruction of his family.

What was it that the empire soldiers wanted to find so desperate? Or, more importantly, what was it that Calen had killed a man for. He shivered at the thought of it. He had taken a man’s life, and he didn’t even know why. I need to know why.

But shortly after Calen’s impulsiveness forever changes his life and the lives of everyone around him, that closeness to the characters and what they are feeling takes second stage. Before long, Calen is going through things, but there’s little space given to how he feels, why he chooses what he does, and all in all, what’s going inside him (and there’s a similar distance with the other characters). I missed the closeness earlier. Maybe to some people, it feels like too much, like it’s obvious what is going on inside the character and it does not need to be said, but I don’t know these people that well yet. There are so many different ways to respond, just to take the example of the killing for one, so many different ways for those feelings to develop – or to fade, and so many different paces for that to happen with. And it just stops being told, and instead the story is mostly what’s happening and when, and so on, with the feelings and reactions – beyond ones like cold, exhaustion, wounds – taking backstage.

Though there is a little redress to this loss of feeling, with a scene or two near the end of the book, notably a speech Calen makes that sparks with his feeling. I really liked Calen’s speech to the dwarves, by the way.

This distance extends even to something that is new enough I really thought it ought to merit a lot more time and delving into deep, inside-the-person sort of things, as it is such a deep, interpersonal bond: Calen’s relationship with the dragon, Valerys. Valerys hatches pretty late in the book, but while he’s there, and he’s definitely not forgotten about, and we get tiny glimpses of his relationship with Calen, the care and loyalty and protectiveness between them, but I really missed the closeness. I feel like I could have related to and understood the change in Calen as he becomes Draleid – Dragonbound, by fire – and their relationship a lot more if that closeness to how Calen is feeling and developing had been kept, and then explored through the change in his life and who he is when Valerys becomes part of him. As it is, I feel like I didn’t really get to know Valerys very well, though I loved the scene where he takes his first flight in the courtyard at Belduar. That one rang with the earlier closeness to the character’s lives, moment by moment, instead of just what obviously contributes to the plot.

Actually, near the end of the book, Valerys becomes a big part of it, and maybe it’s mostly that the author does not really know how to write a creature as young as Valerys is at first, and we’ll get more closeness and more of who Calen and Valerys are now in the next book.

On the other side of things, the setting seemed lacking in originality. There are a dozen things reminiscent of the Inheritance Cycle setting. One, two, three would not have been an issue, but there were so many that it got a little old (though I don’t know? Maybe these things are elements that are common to a specific subgenre and I just don’t read enough of the genre to know?). But the Dragonsguard reminded me of Galbatorix’s Forsworn, the Fades seem to be inspired by Shades down to their nearly identical names, though there are notable differences, bonding to a dragon renders a Draleid/Dragonbound a magic user of indefinite lifespan, Calen’s choices help to bring about the ruin of his family, one of the people in the group he ends up with is a Rakina/Broken: one who was Dragonbound and lost his dragon. When they get to the rebel city of their destination, which by the way has a bit of an alliance with the dwarves who have been forced to hide underground, it is shortly betrayed and attacked. It got a little old eventually, for me (though it might be a bonus for readers who want more that’s … well, like what this is?).

The characters are original, with original personalities and motivations, even if those motivations are … sometimes similar (such as Calen’s desire for revenge, which makes sense given what happened, of course, as did Eragon’s; but Calen is no Eragon). And the story diverges in lots of original ways, I won’t mention most of them (of course, I’m sure the reader wants to discover what happens for yourself, right, a lot of readers do), and it’s not as if everything that happens has what appears to be its inspiration in the Inheritance Cycle world and plot. There’s lots of original points, the cast can’t be made to correspond to the Inheritance cast, even when they do seem similar they have very different personalities and relationships to each other (for example – I won’t get into too many details, lest I spoil the Inheritance Cycle for those who haven’t read it and might be interested, but Calen’s relationship to the Rakina is nothing like Eragon’s relationship to the one who is eventually revealed as having been a Dragon Rider once upon a time). The plot progresses in quite different ways, and things happen by very different paths more often than not. There are giants/jotnar. Valerys’ egg comes from the far northern icelands, Valacia. The way Draleid are bound and the way dragons hatch is a quite interesting development of its own. And the magic – touching the Spark – is different (though I wonder if it’s very similar to some other world?).

I am interested in the Knights of Achyron, those devoted to the Warrior God and held back from death to serve him. We’re introduced to them in the prologue (and there’s a hint about something in there!!) and but we really don’t get to see more of them, except for one appearance, but I’m quite intrigued as to how that develops.

… And as to how the rest of Calen’s story progresses. Even if it does continue to feel inspired by the Inheritance Cycle, I’m still interested in how it happens, in what choices Calen and the others make and why. And if as the story develops and the characters and the world gain momentum it feels more internally inspired, I am quite interested in how things develop (just, please let me feel them, okay?).

I like Calen’s loyalty. His unwillingness to abandon his friends, no matter what, and his fierce care for others.

Of Blood and Fire is mostly told from Calen’s point of view, but not entirely. Other characters are developed and their perspectives provided.

Plus, I should mention, there are some beautiful illustrations by the author’s brother in the paperback!