It has been right around a month since I started doing Author and Book Spotlights for the Self-Published Fantasy Blog-Off 8 Authors. This time we have Noel, who writes what he describes as nobledark fantasy. His entree is called Fatal Shadow. 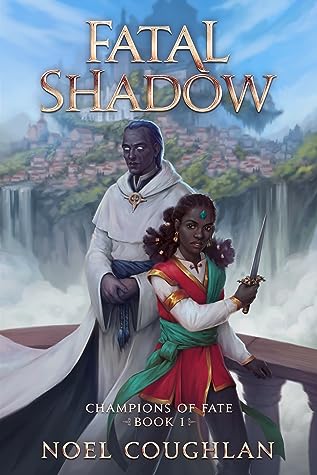 Long ago, magic cracked apart the world and suspended great continents between two suns. But the ebb and flow of human history continues. Trade and war cross the void on dragon wings. Great empires rise and topple…

Drinith’s family is dead, her kingdom conquered. She lives as a wandering exile, seeking potential allies against the tyrant Magian the Infinite while doggedly pursued by his hired killers. The prophetic visions of the oracle, Quiescat, have protected her so far, but his power is failing. All he can glimpse in the future now is his own death.

Proof that an undefeated sect of assassins now hunts her forces Drinith into a desperate gamble. She takes her one last chance to secure the ally she so desperately needs in the floating city of Gyre. But at the end of her journey, she’ll find deceit, betrayal, and murder. And she’ll learn Magian isn’t the only threat to her people.

Isn’t that a nice cover? I like the backdrop!

I never really considered traditional publishing and despite the occasional bump along the way I don’t regret choosing to self-publish. Since 2014, I’ve self-published four novels and nine short stories. (I tend to be a slower writer, laboriously working on what I write until I am happy with it.) I am lucky to have someone I trust who beta-reads my works, a team of editors I trust and a publication process that I constantly try to improve.

In self-publishing, the buck stops with the writer, even when the issue is beyond their control. There’s no bureaucracy to hide behind, no higher-up decision maker to rail against. But on the other hand, you have the power to solve most issues quickly and to learn from your mistakes.

A beta reader you trust is one of the greatest of treasures!

Readers face a million billion books every time they browse an online bookstore. It is hard for an author to make an impression in such an ever-growing multitude. The SPFBO is a great opportunity for readers to find new self-published authors and vice versa.

I had an entry in the first SPFBO so I have experienced being cut from the competition before, and it didn’t dissuade me from continuing to write and publish.

I think ‘Fatal Shadow’ is an excellent book. At the same time, there can only be ten finalists out of three hundred entrants, all of whom sweated over their opuses every bit as much as I did. It would be presumptuous to imagine that my book might make the final. I can’t control when or if it might be reviewed or what a judge might think of it. In some ways SPFBO is like sending out review copies on steroids, and it comes with the same risks.

Obscurity has killed more author careers than a review or getting knocked out of a competition ever has.

Absolutely right. Obscurity is the bane of author careers. (‘Bane’ is a fantasy word isn’t it? Or just an old one?) And I think this is an excellent approach! 😀

‘Fatal Shadow’ refers to a shadowy figure in a prophetic vision that one of the characters experiences and Fate as a divine entity is a threatening presence throughout the book. For example, the oracle Quiescat is haunted by a vision of his impending death. Though his order built up ‘rules’ about the Tear of Fate, the object that allowed them to peer into the future, they only ever had a superficial understanding of its workings. They stole the Tear originally so for generations they have lived in fear of falling into the hands of its presumably hostile owner.

LOL. I sense some potential irony here, I think?

One of my favorite parts is the trip on the dragon, the Surly Bonnacon to Gyre. Dragons in the Crevast are of monstrous size and people use them to travel across the void from one continent to another. They basically are ‘saddled’ with sailing ships and have ‘crowns’ on their heads where the captain and the so-called dragon whisperers steer them. It was a lot of fun inventing all the different parts of the ‘vessel’ and the culture onboard.

Your setting sounds fun and imaginative!

“No dreams disturbed Quiescat’s fitful sleep. Mortal men dreamed, why couldn’t he? Was even that scrap of comfort to be denied to him? The dead don’t dream, and he had been marked for death.”

These lines were quoted in a review recently and I’d completely forgotten I had written them!

Nice. Or not nice.

I would say the best way to describe the book is nobledark. The main characters are good people who want to do the right thing, but they live in a treacherous world where everyone who offers help has their own agenda, and sometimes to survive, they must make compromises at times against their instincts.

I like Drinith because she’s a decent person. She starts a bit too reliant on her advisors, the oracle Quiescat and the warrior Gelasin, but throughout the story she emerges from their shadow. I guess she has no choice, being hunted by an order of assassins who never fail to kill their targets.

Quiescat, before his exile from his temple at Godsdoor was a stubborn vain man who treated kings like beggars, but by the time we meet him his arrogance has dulled greatly, and he is a better person for it. It’s still there, surfacing sometimes, but life (and death) is always ready to teach him more humility!

I’m currently writing the third book in the series. The second book, Greater Evil, is already released. If anyone wants a taste of the style of the series, there’s a prequel short story, No Escape, which is free most of the time. If you enjoy it, it’s a good indication that you’ll enjoy Fatal Shadow.

Thanks for telling us about yours book!

Noel lives with his wife and daughter in the West of Ireland. He writes epic fantasy, science fiction and horror.

From a young age, he was always writing a book. Generally, the first page over and over. Sometimes, he even reached the second page before he had shredded an entire copybook. And you couldn’t even recycle all that wasted paper back then.

When he finally wrote and published a book, it took him fourteen years. The Golden Rule became two books so let us be generous and say he averaged seven years per novel. He has gotten a little faster since then. Honest.

His hobbies include writing, reading, and reading about writing. He has written about reading in the past, and he still writes about writing. He would happily stay at home all day writing, but the family dog, Ruby, insists on taking him for daily walks.

His pet hates include writing his biography and referring to himself in the third person.

You can find Noel’s book, Fatal Shadow, on Amazon, Goodreads, and Storygraph.