Hello. As a two-time SPFBO entrant, I’m doing a series of spotlights for the authors who entered their books in SPFBO 8. You can find out more about the details of SPFBO (the Self-Published Fantasy Blog-Off) on Mark Lawrence’s website here. Today, I am featuring T.A. Hernandez, who writes fun YA Fantasy that deals with trauma, connections, and some other themes she hasn’t fully revealed, but you can find out more below. 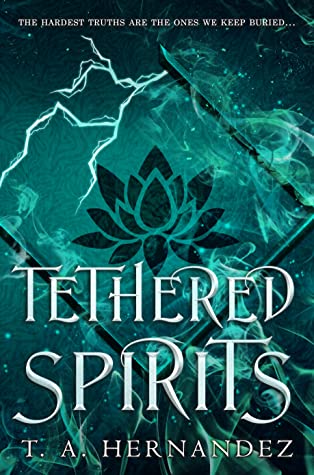 A man with an unknown past

For years, Amar has traveled the Kavoran empire, seeking a way to recover his lost memories and end the curse that plagues him. With support from loyal friends, Amar may finally be on the verge of finding answers, but to do so, he’ll need to enlist the help of an unexpected guide.

A girl afraid of her own powers

Kesari is a Tarja, granted magical abilities through her Bond with a spirit named Lucian. Haunted by past mistakes that have left her desperate to sever her Bond, Kesari has her own reasons for agreeing to help Amar. But in doing so, she may finally have to face the fears she’s carried ever since leaving home.

A woman on a vital mission

Meanwhile, a young refugee named Aleida is in hot pursuit, hoping the secret behind Amar’s curse can save her brother from a fatal illness. With so much at stake and little left to lose, Aleida will stop at nothing to get what she wants.

And when their paths collide, all three are set on a journey to unravel a mystery far deeper than they ever suspected.

You can get Tethered Spirits from most e-book retailers here.

Now, onto the questions!

I originally had my heart set on traditional publishing, even though there were some drawbacks that were not appealing to me. I didn’t know much about self-publishing until my critique partner decided to self-publish her novels, at which point I started looking into it more and reading some self-published books. I really liked the idea of having a greater level of control over my books through self-publishing, specifically in regards to the book’s design and the timing of getting it to readers. That route has been going pretty well for me so far. I haven’t had any kind of wild financial success or anything, but I’ve had smaller successes along the way, and I feel like those successes are increasing with each book I publish.

I can’t remember exactly where I first found out about SPFBO, but it was shortly after I had published my first fantasy novel, Calico Thunder Rides Again, and I decided I might as well throw my hat into the ring for SPFBO 6. It helped that there was no entry fee for the contest so I really had nothing to lose by entering. I went into it with very low expectations and I was absolutely thrilled when my book was chosen as a semifinalist before being cut. I’ve tried to have the same mindset for this round of SPFBO as well. Obviously, I hope Tethered Spirits (my SPFBO 8 entry) does well and that my assigned judge likes it, but I’m also just trying to have fun and see this as an opportunity to get the book in front of more fantasy readers. If that’s all that comes from it, I’ll still consider it a success.

I think that’s a great approach to SPFBO! And that’s wonderful your book made Semi-Finalist! I, too, think the fact there are no entree fees to SPFBO is a real appeal.

The title of Tethered Spirits could be viewed as a reference to a few different things in the story. One of the main characters is a man who’s been cursed with immortality, but it’s a version of immortality where he can (and does) still technically die–he just comes back to life afterward. His soul is tethered to the physical world because of his curse. The title also references the other two main characters, Aleida and Kesari, who each possess magical abilities because of the Bond (or tether) that connects them to certain spirit beings in the story. There’s a third reference to the title that comes from the end of the book, but that’s a bit spoilery, so you’ll have to read it if you want to find out what that is.

Ooh, that’s a lot of really neat stuff behind the title! I like how it ties to so many elements in the book, in different ways.

There’s a scene in the middle of the book that involves retrieving one character’s lost memories through magic. It was a really complicated scene to write because there’s so much going on, and for a long time, I wasn’t sure I could ever really pull it off. I put a lot of work into it and I’m sure it went through more revisions than any other scene in the book. In the end, all that work paid off. Readers have responded really well to that scene, and when I reread it, I’m still really proud of it…and still not quite sure how I managed to pull it off after all.

That sounds like it was a tough and intriguing scene! It can be hard to properly balance when there are a lot of things going on, but it sounds wonderful!

Aww, this sounds sad, but also like there’s a lot of possibility and development. Also, sounds like you have a very interesting antagonist.

I really appreciate having the opportunity to talk about my writing and my book. Tethered Spirits is a story that’s very close to my heart, probably more so than anything else I’ve written. On the surface, it’s a fun YA fantasy quest story with a loveable cast of characters, but there are deeper themes woven into it that are very meaningful to me and hopefully will be to readers as well. So much of what I love and believe in can be found in this book, including an exploration of trauma, how we find healing from trauma, and the importance of human connection and relationships. If that sounds like a story you’d enjoy or connect with, I hope you’ll pick it up and give it a chance.

It sounds interesting, but it may be a while before I look into it further, as I’m currently in up to my neck, lol.

T. A. Hernandez is a science fiction and fantasy author and long-time fan of speculative fiction. She grew up with her nose habitually stuck in a book and her mind constantly wandering to make-believe worlds full of magic and adventure. She began writing after reading J. R. R. Tolkien’s The Lord of the Rings many years ago and is now happily engaged in an exciting and lifelong quest to tell captivating stories.

She is a clinical social worker and the proud mother of two girls. She also enjoys drawing, reading, graphic design, playing video games, and making happy memories with her family and friends.

You can get Tethered Spirits here or check it out on Goodreads.

And you can find T.A Hernandez …