Birth of the Firebringer 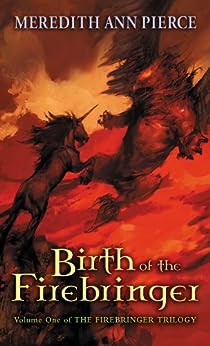 Jan must seek his destiny.

Jan was born under a dark moon, impetuous, headstrong, prince of unicorns. His spirit was stronger than any other colt’s; his eyes brighter.

This year, Jan’s mighty father Korr allows Jan to go with the other unicorns on their journey across the Great Plain. Korr knows Jan is too young and too curious for the perilous journey. But he does not foresee that it will force upon Jan a terrible choice.

Jan’s destiny will be the destiny of all unicorns. When the time comes, will he be strong enough to face the fire?

I really enjoyed Birth of the Firebringer. It is one of those books that aren’t easy to describe. It’s one of those books that are appropriate for any audience, anyone who finds the themes interesting or compelling, one of those books that has something regardless of age, and that’s written in a style that should be accessible to people of very different ages. It has very real, rich characters: in many of the scenes, one can feel the personalities and the dynamics of interaction between the characters, even if one only gets a glimpse of the characters, the personality, the relational dynamics. And Jan, his father Korr, his shoulder-friend Dagg, and the young mare Tek have real, developed personalities, rich and different. I really liked Jan’s friendship with Dagg, how fundamental their friendship is to Jan, Dagg’s willingness to play Jan’s games with him. There is a lot of very committed, honest, wholesome friendship.

It’s a story that has adventure in it – but far more than mere adventure, if there is such a thing. A story about a young unicorn whose dreams have been taken from him, in fear that they make him vulnerable to the draw of some evil, leaving him with an insatiable longing, often manifested as curiosity, for something beyond his reach. Jan is wild, prone to swift mood changes, untameable, fierce, and full of thoughtful curiosity, the need to ask questions, to know why and, even if why cannot be known, to ask still. Fierce and full of war and play – or more likely, heedless energy and purpose – Jan is also ever-willing and ever-wanting to learn, to break prejudices and learn new ways or new truths, to question the teachings of his people and learn the depth beyond them – sometimes contradicting them – in a moment.

And Jan’s ever-questing search for truth, to learn more, to understand more deeply, never satisfied with a pat answer, is rewarded, but not in a way that ends the hunt: for that can never be ended.

It is a journey where Jan finds that the Moondancers’ beliefs and customs are narrow and prejudiced, and sometimes wrong, often missing not even the full truth – for none have that – but the openness to the fact that there is more beyond their understanding and customs. A journey where he gets a transforming glimpse into that awesome, wonderful more. Where he finds that the reality within and beyond his world is far better and wider than his prejudices taught, and will always lead him out into more, not the narrowness of thinking he knows all, but the openness of learning and experiencing more.

Birth of the Firebringer is a really great book, that presents very positive views about life and death, and the power behind or within reality and all that is, and an overall attitude of openmindedness and willingness to learn, fostered and nurtured by its attitude towards reality, life and death. It is a view I rarely see, so different from the attitude towards death and evil so commonly presented in so much literature and religion, but that marks some of my favourite books.

“My words were harsh to you before, young stranger,” she said, rising. “For that, I ask your pardon. You have honored our dead in accordance with your custom, and that is unlike any southlander I have ever heard of.”

“And you have honored her slain enemy as well, as is fitting,” the blue unicorn said. “That, too, is unlike what we have heard of southlanders.”

“Why do you dishonor your enemies?” the red filly asked. “Was this wingcat not brave?”

“Is all that is true to its nature not worthy of honor,” the evening blue said, “being part of the Cycle?”

With a book like this, it is impossible for me to think of anything as a ‘spoiler.’ It seems wrong to consider a single scene or word of it as having the potential to spoiler, almost sacrilegious. However, in deference to how other people feel about knowing what happens before they get to that point in the book (though I cannot help but feel that cannot apply to this book), the following might have such information:

To be honest, I don’t have that much to say. It’s just so good the best of it speaks for itself, and anything I can say is only a marring. Here are a few snatches of the conversation that Jan holds with Alm’harat, the Mother of All, in his vision after he defeats the three-headed wyvern and is stung by her. There is so much about this book I loved, and I cannot mention it all. I liked so much of it in such a full way – which is not to say that I liked all of it – that distinguishing, categorizing, and naming what I liked specifically is very hard. And, as with everything, it is much better in the context of the book, the whole together.

I loved this whole scene, so much so that it is hard to choose and cut pieces of it, but here a few:

“It is rest and stillness also,” she replied.

“Is it life then?” Jan answered. “All things that live?”

“The wyverns also are part of my Cycle, and murderous gryphons and wheeling kites. Fire which can destroy and the Serpent-cloud which flings all things to dust.”

Let it speak for itself. See? I loved this so much! And this is the heart. This is why what follows can follow.

Again the presence’s quiet laugh. “So importunate! But is this not what you have always wanted, to apprehend the workings of the Dance? You have looked for it only half knowing and found it only in little bits: in the roiling of storm-clouds and the workings of fire, in the fluting of pans dancing under the moon – in the depths of danger in a gryphon’s eye. In the rolling vastness of grasslands that call out, ‘What lies beyond me? Come see!’”

“Those things that you have always been asking, I have answered now, a little.”

“No!” cried Jan. “You have given me only questions, a thousand more.”

“Study the world and see how it works – make it work your own ends, if you can.”

“But what are my ends to be?” Jan burst out.

A long silence. At last she said, “I leave that to you.”

I love this! Questions are to be asked. Questions are not a denial of truth, of knowing. Know, and question. Know more. Never be afraid to ask questions, know more. And it’s so descriptive and beautiful. The rolling vastness of grasslands that call out, ‘What lies beyond me? Come see!’ And … we must find our nature, become what we must be, ourselves.

I love this book so much! I do not want to cut it – but I must! I cannot share all of it with you right here, just a tiny glimpse.

“But why does your voice sound so familiar to me? I have never met you before in dreams.”

“Whom do I sound like?” the presence demanded, bearing him up a moment more.

“I am you,” the Mother-of-all replied, “and much, much more besides. I am everything you have ever known and that has ever been. I surround you all, and am within you, and am you. You are my kindling; I am the Fire. I am the Circle. I am the Dance. Learn to know me. Come.”