Into the Land of the Unicorns 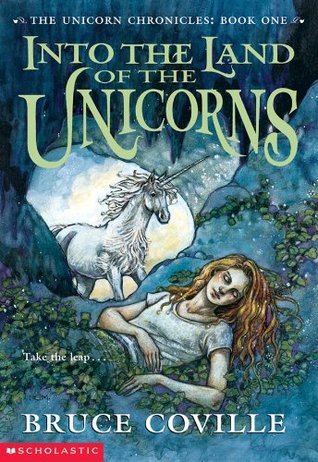 One unicorn dwells on Earth.

Their legends are recorded in The Unicorn Chronciles.

As each chime sounds, Cara climbs faster up the steep bell tower. Eleven! She must be on the roof when the next bell tolls. Twelve! With a deep breath, and only half believing she will survive, Cara jumps off the church roof and into Luster, land of the unicorns.

In Luster, Cara meets many wonderful creatures, but the most magnificent of all is Lightfoot, a rebellious young unicorn. Cara’s band of friends come to include a hair creature named the Dimblethum and the monkey-like Squijum. Together, they set out to reach the Unicorn Queen before the mysterious man who is following them does – to prevent the destruction of all unicorns forever.

What if things aren’t what they seem like at first glance?

This is a beautiful story, full of fairytales images and magic, populated by all sorts of magical creatures from the well-known unicorns and dragons to unique creatures such as the Dimblethum and the Squijum. I’m honestly not really that familiar with myths and folklore about unicorns and such, but there’s a feel that a lot of bits and pieces of traditional imagery has gone into this story. It has a feel both old and fresh.

Cara is a relateable young girl, thrust into a world that seems utterly unbelievable to most – but she still remembers a time before she learned that unicorns don’t exist. She still remembers believing in unicorns and magic, even if she has come not to – until she begins to learn again, they do. The world is so much more than the stripped-down version of it that “adults” consider believable. Her reactions to the things that happen to her or around her are enjoyable and genuine and fresh. (PS. I count her ‘actions’ in ‘reactions’ since she’s hardly responsible for the situations in which she finds herself; but she is an appropriately active character).

Thus begin Cara’s adventures with the young unicorn Lightfoot and a handful of other comrades. Lightfoot, too, is a fascinating character I found to be quite vivid. Young for a unicorn – something like a teenager – he is something of a rebel and his family considers him to be very immature. Yet there is nothing rebellious about Lightfoot: he is simply following his own heart instead of what others expect from him. He is kind and gentle and brave.

When another of their companions is captured:

She thought about that for a minute. “It might be the most sensible thing to do,” she said. “After all, the most important thing is to keep the amulet from falling into the wrong hands.”

Cara paused, her hand still in the tree trunk. “But leaving the Dimblethum doesn’t feel right,” she continued.

She could feel confusion beginning to creep over her. “So the question is, should we risk the mission, and the safety of all the unicorns, in order to rescue our friend?”

The painful memory of the way [her parents] had abandoned her made it impossible for her to do the same to anyone else.

“We’re going to get him,” she declared.

The criticism stung like a slap. “Why do you say that?” she asked sharply.

“Because it is what I would choose,” he replied, sounding amused, “and my uncle has assured me many times that I am very immature.”

This is a rare and beautiful story that’s full of hope and a belief in real goodness, and of the call to be compassionate and open-minded. Here is the ancient war against good and evil – but there are no really bad people, rather evil is sprung from lies and fear and hate. I really enjoyed that touch: the delvers are the ancient enemies of the unicorns in Luster, constantly in conflict with them for a reason that the unicorns, at any rate, do not remember, but some delvers have the courage and heart to think about and challenge what is asked of them and help the unicorns, at great risk to themselves. Beloved, the ancient enemy of the unicorns, is deceived, and full of hate and fear driven by a terrible tragedy no one really intended.

There is real evil, and exactly where it starts, no one knows. But goodness is even realer and far more beautiful, true and compelling. In this story, there is great evil, but it comes from people who are deceived and are chained in the lies they’ve received through fear and the hatred that comes of fear – not because their hearts are evil. And the wounds people receive or cause because of fear and the lies they’ve been told – or the lies they tell – are deep and not easily healed, but compassion is real.

This is a story that’s accessible to children, full of appealing images and creatures – courageous and kind teenage unicorns, the brave and loyal bear-like Dimblethum, the chattering and affectinate squirrel-like Squijum – and other people, and full of themes and characters that provoke thought as deep as the reader is ready for. As I believe is true of the best stories, this one can be read by all ages (for as children’s books like these attest, children can think fully as deeply and intricately as adults, if adults are just willing not to impose their preconceived notions on children’s ability to think; and perhaps we who are older need to be always ready to realize that some of what we think we learned may have been unlearning, and must now be unlearned).

Anyway, I feel that my review does not remotely do this story justice, but I had to offer it something. Once again, this is a beautiful story that lives in the colorful images that are only conveyed by the words, and so remains in the mind long after the page is closed.

Can hearts be mended? Can lies be unwoven?