Hello! Today we have noblebright Urban Fantasy debut author Yasmine Maher with us. When she’s not writing Yasmine enjoys, among other things, playing with her cats and singing. I had the privilege of ARC reading her debut, Echo: The Curse of the Blackwood Witches a few months ago, and will hopefully be posting my review of that this coming Friday!

Now, let’s see what Yasmine is going to share with us.

To be honest, a few weeks ago, I didn’t know what the genre noblebright was or that it even existed. But as I read the definition for the first time (which happened to be on your blog!), I realized it represents everything I’ve ever wanted to write.

The world of noblebright fantasy might not be perfect or utopian, but it calls for hope and acknowledges that our choice and decisions can make a difference. Even if bad things happen, we still have something we can do about them. And if we push hard enough, if we’re courageous, honest, and kind, we can change the world.

Tell us something(s) about your story that shows us a glimpse of how you express that in your books.

I believe Echo’s entire story is a journey to discover herself and the role she wants to play in the world. Her magic can be catastrophic, yet she always has a choice to use it for good, for healing instead of destruction, and for redemption instead of vengeance.

Every character in the Echoverse, no matter where they came from or what they did in the past, hopes to repent, to do better, to start over. And this hope itself is what makes the book a noblebright fantasy.

“The world doesn’t need a hero. It needs dedicated people willing to share their powers to make things better for everyone else.”

In the interest of expressing hope, courage, of writing about redemption, or exploring what it really means for compassion, integrity, etc, it’s sometimes necessary to write some of the darker things in the world. How do you tackle that in your stories?

I don’t believe that the concept of noblebright means turning a blind eye to the darkness in the world. In fact, it’s through the darkness that it becomes necessary to be hopeful, courageous, and kind. I respect books that deal with heavy topics (war, abuse, disease, death, and loss) while maintaining a positive, hopeful message overall. While writing my debut, I tried my best to be true to my characters, where they came from and the hardships they faced, and, simultaneously, give them all a chance at redemption. I think I’ll continue to do that with my future books as well because I believe this is how the world works. Yin and yang. Light and dark. North and south. Having both opposites gives life meaning and beauty.

This might sound cliché, but I truly believe that art can change the world. Books, music, media, pottery—every piece of art can teach us to be kinder, more tolerant, and more understanding of one another. And through lifetimes, we’ve witnessed great books create meaningful change in the world (to the point that in several countries, laws were influenced by authors and screenwriters). I’m not claiming that I’m even 1% close to being that good or writing something so impactful; however, I choose to write nobleright because it helps me create meaning and value within my stories and in my life.

What are a few books by other authors that really speak out to you? That show what the genre means to you or what aspects of it are nearest your heart? That you would recommend to readers wanting to explore the genre? Or who are already familiar with it and love it?

I’m always amazed and touched by H.C. Southwark. Their book Eternity’s Echo stayed with me months after I finished reading it just because of how brilliant and heartwarming its message was. It’s a great example of a noblebright fantasy book that’s not afraid to tackle the dark subjects.

Thanks for sharing that with us, Yasmine!

Yasmine Maher is a fantasy author, copywriter, and Director of Fables and Facts Publishing. As a passionate wordsmith and an active member of the Twitter writing community, Yasmine loves to weave captivating tales that inspire her readers with whimsical adventures, magic, and larger-than-life characters.

When not writing or dreaming up her next story idea, Yasmine loves playing with her cats, singing, watching Kdrama and Marvel, and advocating for mental health awareness.

Echo: The Curse of the Blackwood Witches 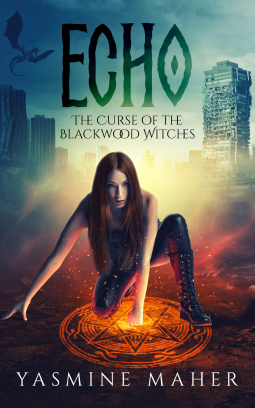 Ten-foot-tall, sword-clawed beasts raid the Blackwoods family wedding and slaughter the guests, but thanks to the Magic Board, everyone blissfully forgets about it, except Echo, who now has to deal with learning she is a witch, and the fate of earth depends on her skills to defeat the immortal Jivar.

With nothing but the help of two quirky light spirits and her (technically forbidden) dark magic grimoire, Echo’s in for lessons more complicated than potions and spells as she discovers the truth about her family and her heart’s desires.

You can check out Echo: The Curse of the Blackwood Witches on Goodreads or order it from Facts and Fables.

If you’d like to do a spotlight with me as an author, or provide feedback on what you’d like to see as a reader, check out this post and get in touch!