Hello! Autumn is really coming up on us, and we have another Spotlight for the lovely authors of the 8th annual Self-Published Fantasy Blog-Off. Today we have K.E. Andrews with The Assassin of Grins and Secrets, and her main character (the assassin, I believe), Serein, has synesthesia (which, incidentally, I also experience, so how cool is that?) 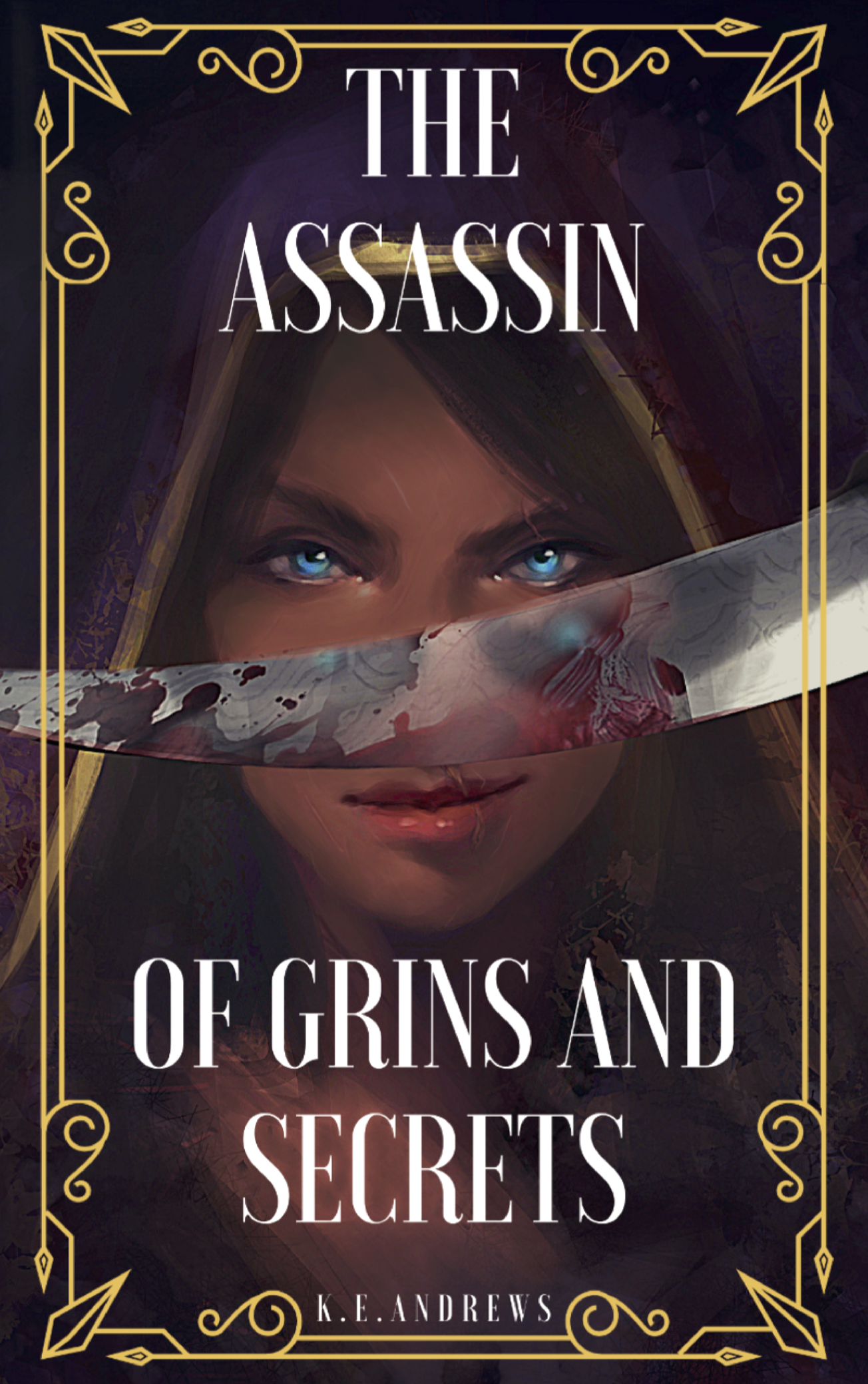 Once the infamous assassin who killed with a smile, Serein now waits for death in the fighting pits of the Harpy’s Chest. When the crown prince of Sarddon, Rameses al-Amirmoez, seeks her out with an offer of freedom if she serves as his guard, she must decide whether to work for those who ravaged her homeland or die. In a land of hot sands and dying magic, Serein plays the game of secrets with Uriah and Rameses, knowing one wrong step could end her life. As the shadows of her past catch up with her, she has to choose between pursuing vengeance and protecting a secret only she knows.

And, onto the Questions!

So I had heard about self-publishing in college and it always intimidated me. But once I started doing more research and reading more Indie books, I started to look into it more. I had tried querying my book to lit agents and wasn’t getting any luck, and I didn’t want to wait years to publish a book. While self-publishing has been a huge learning experience and all the finances are on me, I’ve really enjoyed getting to be super involved with the publishing process. I knew from the start I wanted to design my own cover, so this route gave me the freedom to control the design, include interior art I wanted, and release the book on my timing. It’s time consuming and sometimes frustrating, especially when I make a mistake, but I learn and gain new skills, as well as a deeper understanding and appreciation to the publishing process and all that goes into making a book.

Another author who’s really into designing her own covers! That’s so cool! It’s certainly a whole ton of effort, but I LOVE the control!

I’d known about this contest for a few years, and I’ve been a fan of Mark Lawrence’s work for a while. I wanted to submit my book just to see what would happen honestly. Just to be alongside such wonderful authors was enough, even if my book doesn’t win. It was pretty nerve-wracking to put my book out there, worrying if it was good enough—and it still is even after getting my first review. Now I’m just waiting to see my name in green or red. I’ve loved how supportive this group has been so far, and even though we’re technically competing against each other, we all kind of win because we get to see all these Indie books in one place and get to meet each other whereas our paths may never have crossed before.

Absolutely! I’ve met some really lovely books/authors through SPFBO I otherwise might have never come across! And most … weren’t even Finalists, so I guess that speaks for something?

Before, my book was called The Grinning Assassin, but that sounded a little too plain. Instead I used that for my series name. I don’t quite remember when I came up with The Assassin of Grins and Secrets for the final title, but I liked how it flowed and felt it summed up the story well. I also found that it matched a lot of titles in the fantasy genre.

It provides an intriguing image, with a lot of questions in it, doesn’t it? And it matches the cover!

Oh, that’s a hard one. My favorite scene either has to be this one scene where Serein faces a person from her past or the final fight. I liked the encounter scene because I wanted it to be a twist and for the most part, from what I’ve heard from readers, it landed the way I wanted it to. The final fight turned out much bloodier than I had originally intended and I liked it because it was such a hard and raw scene for me to write. As for something I really liked about a character, it was Serein’s synesthesia. It was a choice to add in years ago and I just happened to think about it one day and realized it wasn’t something I saw a lot of in stories, especially fantasy. So that made it a challenge but also a chance to experiment with what it would be like for a character to see sounds as colors and how that could be useful. I get sometimes that people don’t understand it or see it’s use, but I wanted to write it as just a part of who she is, not really something that was magical or a special skill. It’s just a part of how she experiences the world and something she utilizes to give her an edge.

That’s cool! I have a similar synesthesia, so that seems pretty neat to me!

One of my favorite quotes would have to be from page 139:

“That’s the thing about promises. We make them, trusting that despite what comes, we can hold true to them,” Rameses said and stood, brushing dust off himself.

Promises … that is definitely a thing. But does that mean you should never make promises? … I wonder what the context is …

What would you like to share? Take this in any direction you consider to be related to your book and your writing. It can be as short or as long as you like!

My main hope with this book is, despite how dark is can be and how much the characters have been hurt, that readers can still find the beauty of the story in the broken moments. This is a story with characters working through trauma and hurt, not always in the best ways, but to the best of the character’s abilities as they learn and grow. They may not grow much now, but don’t give up on them. Healing and growing is messy and I wanted to reflect that in this story.

Oh, by stars, shells, and skies, this is AWESOME! I love this sort of thing. I want to italicise, bold, and underline EVERY WORD!

K.E.Andrews has always been an avid reader, which sparked her passion for writing at an early age. Most days she spends her time daydreaming about stories and making mood boards. When she’s not writing, she tends to her plants, plans out her next crafting project, and binge-watches shows on Netflix. She currently lives in Powder Springs, Georgia with her family and three cats.

The Assassin of Grins and Secrets on Amazon

The Assassin of Grins and Secrets on Barnes & Noble

The Assassin of Grins and Secrets on Goodreads