I am inviting any authors with entrees in the 8th annual Self-Published Fantasy Blog-Offs for a Spotlight on the blog. Today, as Summer turns towards Autumn, we have A.C. Cross with When Blood Runs Gold, a gem of a title that took pulling teeth to find…. 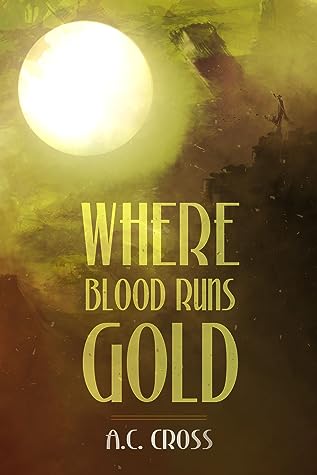 Sheriff Errol Thorpe’s life is chaotic, brutal, and above all, solitary. After an unimaginable loss years ago, all he feels is the compulsion to seek vengeance. But when a vulnerable family arrives in town, facing an ugly future, he is pulled headfirst into a web of violence, secrets, and things he never imagined. In search of truth and answers, Thorpe finds himself battling deadly flesh-eating Dust, acidic golden blood, and the political designs of powerful people – all the while learning how to be a person again. When Dust rises in San Dios, people hide indoors. When Sheriff Thorpe arrives, people run.

I wish I could make some tongue-in-cheek self-aggrandizing statement about how I weighed the options and decided that self-publishing was the more effective route or something like that. I can’t, though. If I want my stories to be read by people, self-publishing (as of right now) is my best and only option. That’s not to say it’s not without its benefits or its drawbacks! There are pros and cons but there’s just something about people talking about something you created – trad or self-published – that makes all of it worthwhile.

I think that really speaks to where a lot of us self-published authors are and what we want — and we don’t always need tongue-in-cheek self-aggrandizing statements! Thanks for sharing!

I entered because I wanted a better experience than my previous time. I won’t go into detail about that, but there was a considerable amount of drama surrounding my group the last time out and I wanted to try again. In terms of stress, it really doesn’t affect me all that much. Sure, I want to get a great review and tons of readers and all that lovely stuff, but there’s so much subjectivity and, frankly, luck involved that I’m just happy to have people reading and talking about my book, regardless of the context.

All of that to the point – and that’s a fresh perspective: I want to try again and have a better experience than last time! Best of luck to you in all regards!

Book titles. Why did you choose the title you did for Where Blood Runs Gold?

I’ll be honest. Choosing ‘Where Blood Runs Gold’ as a title was like pulling freakin’ teeth! Normally, I’m really solid with titles. Nearly all of my WIPs actually start with the titles and then grow from there, but this one…this one took until the second round of edits to finally work. It was a relief when I finally found the right one. Don’t get me wrong. I adore the title and it really has clicked with people (at least from what they tell me). It was just a miserable time trying to find the title that fit the book. I did Twitter polls, Facebook polls, begging friends, and all manner of things before it finally happened. Yeah, it was that intensive. Not the biggest fan of that, gotta say.

Well, at least it’s done and over with, right, and you have something you like? — And that’s neat, to usually have the titles so early!

I think that the scene in Redemption is one of my absolute favorites and is one that I can re-read over and over. No spoilers, but that (to me) is the scene where the book really shifts from a more standard Western with some weirdness to moments of outright horror. The atmosphere just drips with dread and I was tense even writing the dang thing. More than a couple of readers have mentioned that scene being one they remember and I am totally fine with that. Hopefully I can replicate that sort of feeling for readers in future books!

I love finding scenes (in my own books and others) that I could almost read on loop.

Same sort of thing as with the last question, except this time what about a quote? One to five lines or so, but this isn’t math.

I’ll go with this one. It’s a minor spoiler but it just ripped my heart apart as I wrote it.

“Night, Greta,” he said and turned to leave. As he reached the door, she called out to him.

“I know I lied about you being my father tonight, but I’d be okay with it if you actually were.”

He smiled, and for a moment, he felt that hard, angry coal that was his heart unfreeze just a little bit.

Mixed metaphors there! I like it 😀 (And it makes you wonder what’s going on?)

It may sound trite or like I’m just repeating what so many others have said, but if you love a book, if you love what a writer has done, don’t feel shy about it! Leave a review – they are godsends. Send the writer a Twitter message or tag them in a positive Tweet. Send an email thanking them. Writing and publishing is, despite a great community, a solitary and isolating profession. You hope beyond hope that what you create reaches people and resonates with them, but you can’t know what you can’t know. So, let them know! I can promise you that 99.9% of all writers will be flattered and you will make their days. When you scream into the void and there are voices coming back, it doesn’t feel so lonely anymore.

It gets repeated a lot because it really matters. It really makes a difference. — Coming from another Self-Publishing Author. 😀

A.C. Cross is a doctor, but not the kind that you want treating you for kidney stones or pneumonia or anything. That’d likely make your situation much worse.

He (currently) lives in the Great White North of the United States as a bearded, single man.

He’s a lover of words, many of which you have just read in this very book.

He’s an admitted scotch whisky and beer snob and his liver would not argue with him.

He has written four books now, including this one, but the other three (in the Roboverse) are funny and not nearly as sweary or violent.

You can find more about him as well as some neat little free stories at www.aaronccross.com.

And you can check out Where Blood Runs Gold on Goodreads or get it here!