Self-published fantasy can be so many things. Yesterday, we had Leslie Conzatti with her SPFBO 8 entree, which was a fairy-tale retelling. Today, we have a fantasy set in Victorian London by history major, Patrick LeClerc: The Beckoning Void. 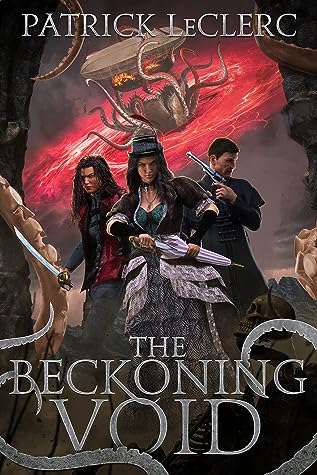 Emelia DuMond is an actress, her skill at adopting and changing her identity lifting her from her humble beginnings to success on the stage of Victorian London. And to the attention of the Ghost Society, a secret organization who work to defend the world from threats of the paranormal. After centuries of seeking, the sinister Disciples of the Void have obtained an arcane book of great power. A power that could tear the veil between dimensions and plunge the world into a dark, unspeakable future.

Now she has recruited an aging soldier of fortune burdened by a conscience, the sword wielding daughter of an Afghan brigand and an airship whose captain escaped slavery during the Civil War by stealing a Confederate vessel.

Can Emelia and her band of plucky outcasts save the world from a cult of fanatics intent on unleashing an ancient horror?

What an interesting set of characters to start with!

With that, onto the Questions!

I like the control I have as a self published author, and I like not wasting time on queries and submissions. Yes, I have to do my own marketing, but that’s true of most traditional authors as well. If I’m going to do the legwork anyway, I may as well skip the submission/rejection cycle and spend my time writing the next book.

Haha, right! No use begging someone else AND working on THEIR schedule in order to share your profits with them.

A writing friend of mine told me about it a few years ago, and I’ve entered a few times. I made the finals back in SPFBO 4 with my urban fantasy “Out of Nowhere.” I think it’s a good venue to get exposure, especially for relatively new writers. There’s a good sized community and exposure is tough to come by.

And I did make a lot of friends and contacts and found a number of new authors to read.

That’s fun! A very belated congratulations for that to you!

I chose “The Beckoning Void” for a few reasons. First, the cult are trying to open a path from our world to the Void, where their mad gods live. So that’s pretty literal. On a more symbolic level, each of the major characters has a personal Void, a desire for something that is both seductive, but dangerous, destructive. Something that forces them to decide how much of themselves they will sacrifice for it.

It certainly gives it a fantasy, eldritch feel! The double connection is neat 🙂

This one is a bit long, but I do like it. It’s Count Roderick dealing with the man from the bank. I think we can all relate on some level. Please let me know if it’s too much and I’ll post something shorter.

“You have the book?” asked the first ruffian. A lanky fellow with a face like a corpse but not as joyful.

“I do.” Roderick reached into his satchel and handed it over.

In truth, he was glad to be rid of it. The thing made his flesh crawl. It was old, filled with symbols and scribbles in some language he couldn’t read but found disquieting. The leather binding reminded him of human skin and the ink was the rusty brown of old blood. He told himself that this was just silly superstition. That he was a man of reason living in an enlightened age, but the blood of an Irish father and Gypsy mother provided fertile soil for the seeds of eldritch horror to take root.

The cultist leaned over it, the fire in his eyes burning hotter. He reached out and touched the spine, tentatively but with restrained desire, stroking it with a trembling hand. The others peered over his shoulder.

Like virgins on their first visit to a brothel, thought Roderick.

“I’m impressed,” said the leader. He placed a purse upon the table. “I’d have thought Dr Carmody would have defended this with his life. And was ever vigilant.”

The count shrugged. “I enlisted the help of a lass I know who excels in distracting even the most vigilant of men. And making them much less capable of defense.” He looked into the purse and frowned. “This is half what we discussed. I did bring you the whole book. I’m fairly certain of that.”

“When our leader receives it, the rest of your payment will be sent to you.”

Count Roderick’s frown deepened. That wasn’t the agreement. He considered the situation and figured that the reduced payment had a great deal to do with the fact that they had more weapons than he did. The fact that they were willing to hand over any payment at all was likely because he had enough weapons to make completely stiffing him not worth the risk.

He thought for a long moment. Accepting such treatment was bad for business. On the other hand, they did have him outnumbered three to one, even though the one was him, which he figured brought the odds pretty close to dead even. Still, even a fair fight was something best avoided until you could find a way to make it unfair in your favor.

He was still debating with himself when the corpse-faced man interrupted his train of thought.

“This woman. If she knows of our plan, she must be eliminated. Unless you’ve already done so.”

That was a step too far. The count was well aware that sometimes one couldn’t make an omelet without murdering some witnesses, but these men grated on his nerves. They were too direct, too sure they could impose their will on him. Him! Like so many fanatics, they were simple blunt instruments, intent on bludgeoning the world into the shape they wished and entirely lacking finesse. Nothing wrong with a good old blunt instrument, when the time called for it, but he’d be damned if he was going to be beaten into shape. And “eliminating” Margarethe would be a criminal waste of a perfectly good prostitute with a captivating smile, a real sense of panache, and one of nature’s finest sets of tits. May as well burn the Sistine Chapel.

The count leaned back in his chair, stretching his long legs and rolling his neck. His frown disappeared, replaced by a Cheshire cat grin.

“Sorry, boys,” he said. “I’m afraid this simply isn’t the done thing, as my dear old dad would say. I’ll be taking that book to your boss myself, and we can discuss things like ‘payment in full’ and ‘professional courtesy.’”

“You expect us to agree to your terms?” said the man, his words grating like the stone door of a tomb.

“Don’t see that the opinions of three dead men should concern me overly.”

So is this how those cultists get that arcane volume? I guess one has to read the book to find out. (Is that a pun?)

I’m fond of this exchange. Our heroes have just survived an attack on their airship.

“Well,” asked Emelia, “what is your opinion of that bit of excitement?”

“Whole crew did an exemplary job in defense,” said MacGregor.

“We sent a horde of black souls to Shaitan and made the survivors run like cowards to shake in their boots in terror of honest steel in brave hands,” said Alyah.

Connolly took a sip of coffee. “I like her version. If you’re writing a report, use that one.”

What would you like to share? Take this in any direction you consider to be related to your book and your writing. It can be as short as a paragraph or as long as a guest post. Feel free to ask yourself questions and then answer them, if you’d prefer to do that.

I had a lot of fun writing “The Beckoning Void,” because, as a history major and action adventure aficionado, I got to play with all my passions. The Victorian Era is a fascinating period, with rapid technological and social change. I got to touch on classism, sexism, racism, slavery, colonization, the potato famine, the Irish diaspora, the American Civil War, the British Raj in India, religion, science, and sexual orientation, all while filling the book with swordfights and witty banter and enough action for a summer popcorn blockbuster.

Sounds like a lot of complex themes and an interesting weave!

Patrick LeClerc makes good use of his history degree by working as a paramedic for an ever- changing parade of ambulance companies in the Northern suburbs of Boston. When not writing he enjoys cooking, fencing and making witty, insightful remarks with career-limiting candor.

You can find Patrick

And you can get The Beckoning Void from Amazon or check it out on Goodreads.