Hello! The SPFBO (Self-Published Fantasy Blog-Off) 8 Spotlights have made it to August! (For more information about the Blog-Off, you can visit the organizer, Mark Lawrence’s, page here). Today we have Hannah, who has years of experience running an equine business (in case anyone doesn’t know what that means, it’s something having to do with horses! haha). Her SFPBO 8 entree is a romantic fantasy called The Hunter. 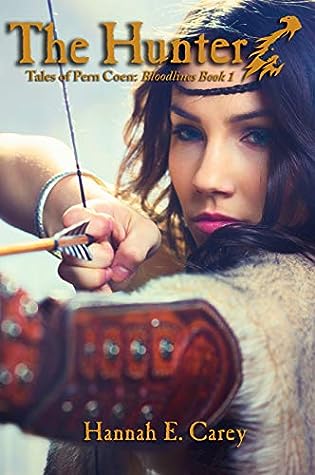 Forced to flee her uncle’s palace in the dead of night in order to save her own life, Duchess Rhiannon of Solis finds herself pulled into an ongoing war. She seeks safety on the shores of the island of Pern Coen, though she knows little of the strange land and its even stranger Spirits. A stroke of fate leaves her at the mercy of a band of rebels led by a notorious outlaw, a man the people of the island call the Hunter.

Conor has lost his family and his home. Forced to live in exile, he dreams of the day that the people of Pern Coen win back their freedom. He has no love for the Empire of Kelnore, but when he finds an injured Kelnorian noblewoman, he can’t bring himself to abandon her. Against his better judgement, Conor offers Rhiannon his protection, but the more time he spends with her, the more he finds his feelings toward her shifting. He’s already had his heart shattered once, does he dare take that risk again with a woman who should be his sworn enemy?

The longer Rhiannon spends with Conor and his band of outlaws, the more she finds herself torn between the life she knew and the life she has discovered on the island. Can she turn her back on all she’s ever known? And can a rugged outlaw capture her heart?

And now, onto the Questions!

There were two big reasons I wanted to go the self/indie publishing route. The first was that I’d had a number of years running my own equine small business, so I was pretty familiar with the ins and outs of being an entrepreneur, plus I knew I enjoyed it! The other big factor for me was the flexibility that came from being in charge of my publishing business myself. As someone who has a challenging post-viral chronic condition, being able to be flexible around my health is important, and being in charge of my publishing business and schedule give me a lot of flexibility. I’m the one making the schedule, so I can suit it to fit my needs.

Knowing you enjoy something is always a good thing.

I entered SPFBO as sort of a challenge to myself to try something different this year. SPFBO is the first publishing contest I’ve entered and I wanted to put myself out of my comfort zone a bit. I can’t say I’ve found it particularly stressful, though some of that might come from my experience in competition in my equestrian life! I’ve learned not to get super attached to outcomes and focus more on having fun along the way. Just getting to a part of SPFBO is a win for me, no matter where my book ends up in the competition at the end of the day.

I think that’s a great life lesson: to have fun along the way. Otherwise, what is life? Why are we even doing things? — Of course, not everyone has the same reasons or goals. 😀

My husband actually helped me choose the title, interestingly enough! I was struggling with a title I liked, and he mentioned just using the name of the outlaw who is the male lead of the story. The Hunter felt like it brought the vibes I wanted to bring with the book, and while the title itself was simple, the series name Tales of Pern Coen added something unique to go along with it.

The scene that always comes to mind when I think of the heart of the story in The Hunter involves a sort of late night, unintentional rendezvous between the hero, Conor, and the heroine, Rhiannon. Rhiannon has gone through some pretty traumatic stuff in the story at that point that makes it difficult to sleep and she discovers that Conor also has things that keep him awake at night. To me, that scene is the moment where Conor and Rhiannon really start seeing each other as people. They both carry a lot of baggage and being on opposite sides of a war along with being from different worlds puts a bit of a wedge and distance between them. For Rhiannon in particular in that scene, I feel like she really starts to see and believe that the controlling world she grew up in isn’t the only future she has before her.

This quote is from the above scene I mentioned. It’s a tad over five lines, feel free to cut it down!

A ghost of a smile crossed his lips. “I thought I heard your people did not believe in children’s tales.”

“A story of a Ri of Blaidd,” Conor said, taking another sip of his ale. “She was gifted a powerful longbow by the Wolf Spirit.”

“Yes, the bow was crafted by the Spirit and held the power of life and death. She used it to save her people and the man she loved.”

“A woman would be deemed worthy of such honor and power?” Rhiannon asked, tilting her head as she stared at him in bewilderment.

Conor’s eyes locked with hers. “As deserving as any man.”

I won’t cut it! That is a neat quote!

I’m personally so excited to be a part of SPFBO this year and honestly really thrilled to see that so many fantasy romance/romantic fantasy titles are part of the competition this year. As a writer who views myself as primarily a romance writer, it’s great to see fantasy romance/romantic fantasy getting a space in the larger fantasy world. I know that it is definitely a genre that’s growing and I have personally read so many amazing fantasy books centered around romance. I’m hopeful more and more readers will start discovering how great that subgenre of fantasy can be and the wide variety of stories, from complex to light-hearted, that can be found in it.

That’s cool! I personally am not that much into romance stories, but I am interested in yours – which brings out the biggest problem with doing these spotlights! I can’t read everyone’s books, but there are so many I’d love to at least give a chance and the time of the day, if I had that much time of day!

Hannah began telling stories from a young age and hasn’t stopped since. She read her first romance novel as a young teen, quickly falling in love with the genre. Most of her stories are a blend of romance and fantasy, inspired by her love of mythology. When she’s not writing, you’ll find her reading romance novels and spending time with her husband, horses, and dog on her small hobby farm.

You can find Hannah on

You can check out her SPFBO entree, The Hunter: Tales of Pern Coen on Goodreads, or get it from an Indie Bookshop or Most Retailers. The Hunter will be available for free download until the end of the Summer.

Additionally, she has a new release in a spin-off series: The Shifter, Legends of Pern Coen, available from most retailers.