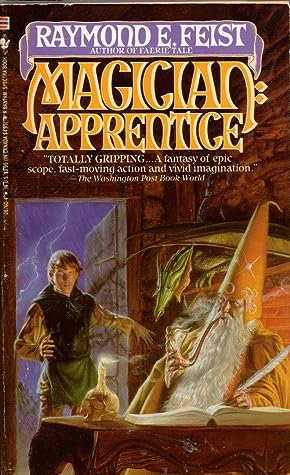 To the forest on the shore of the Kingdom of the Isles, the orphan Pug came to study with the Master Magician Kulgan. But though his courage won him a place at Court and the heart of a lovely Princess, he was ill at ease with the normal ways of wizardry.

Yet Pug’s strange sort of magic would one day change forever the fates of two worlds. For dark beings from another world had opened a rift in the fabric of spacetime to begin again the age-old battle between the forces of Order and Chaos. 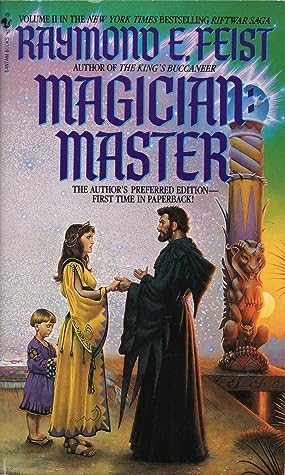 He held the fate of two worlds in his hands ….

Once he was an orphan called Pug, apprenticed to a sorcerer of the enchanted land of Midkemia. Then he was captured and enslaved by the Tsurani, a strange, warlike race of invaders from another world.

There, in the exotic Empire of Kelewan, he earned a new name – Milamber. He learned to tame the unimagined powers that lay within him. And he took his place in an ancient struggle against an evil Enemy older than Time itself.

I am going to review these two volumes together, since I read them together years ago, and in my mind they have taken very much the feel of one book, with Apprentice having plenty of good of its own, but as more of the beginning, setting the stage, for Master, than considered as a separate novel.

Also, I ought to note that the blurbs, like so many blurbs, especially on traditionally published books, are almost all wrong.

The story follows two boys, Pug, an orphan at the rustic Castle Crydee, and his friend, Tomas, who is the son of the keep cook. In a coming of age ritual, boys are chosen for an apprenticeship, and while there are other jobs in life and life without being chosen is quite liveable, there is a great shame and stigma attached with not being chosen. Tomas dreams of being a warrior, and to some degree so is Pug. When Tomas is chosen easily by the Swordmaster Fannon, Pug is chosen by the magician Kulgan, in part because Kulgan sensed great power in him when he showed one of his magical artifacts to Pug in a storm some weeks earlier, but also out of mercy and compassion.

So while Tomas gets along in the art of the sword as well as any boy, neither spectacularly well nor poorly, Pug, despite the power that lies within him, struggles with the art of the magician. Despite Kulgan’s assurances that this is an art which requires a long apprenticeship, in which men come old to their mastery, Pug feels inadequate and insufficient.

The two boys are among the first to find a ship that has floundered on Midkemian shores after passing through a portal from another world, the first portent of what will be an invasion from a vast and alien Empire.

When Tomas is lost in the mountains, he finds himself in a cave of an ancient dragon, where he is gifted magical armor that unites him to an amoral of being of great power from another age: the mythical and alien Valheru. He becomes a great warrior in the defense of Midkemia, but the mind of the Valheru could destroy his humanity and turn him into a villain.

Meanwhile, Pug is captured by the Tsurani, the warrior-people from another world, and taken as a slave. But when the power within him is discovered, he is again whisked away from all he knows to become a magician like none ever seen before.

It is a good, classic epic fantasy, about two boys from humble origins. In my opinion, the Magician novels are among Raymond E. Feist’s best, but that’s half beside the point of the review. It’s very medieval-inspired, but I enjoyed the characters. There are a lot of different characters one gets to know, both from their own point of view and from others, and there’s a lot of variety in the way they’re represented. They aren’t all alike and they aren’t flat. Few of them are truly deep either, but there’s insight in their differences, and the way that it reads more like the author is just having fun with different characters than like he is constantly judging them or holding them against each other. Like the author isn’t even too concerned with what his character’s flaws are, or with aspects of their personalities are flaws or virtues, weaknesses or strengths, but is just enjoying writing them as they are and the story as it flows.

There’s Tomas and Pug of course, but a number of other characters figure prominently in different parts of the story: the bastard hunter Martin, whose childhood was spent with the elves, the second prince of Crydee, Arutha, the once-troubadour Laurie who is Pug’s fellow slave in the jungles of Kelewan, and others.

The way that the mind-melding of Tomas and the Valheru, Ashen-Shugar, was done was interesting. But what really shone to me were some bits of Pug’s experience and training as a magician on Kelewan. He is stripped of his conscious memories and mentally questioned as one of the stages of his training.

– What are you? – came the nest question.

The thought contact flickered for a moment, then returned, as if the other were considering the following question carefully.

– In what manner are you allowed to serve? –

The question had been asked several times before, and always his answer had been met with the blank inner silence that told him he had answered incorrectly. This time he carefully considered, eliminating all the answers he had made previously, as well as those that were combinations or extrapolations of the previously incorrect ones.

Finally he answered – As I see fit –

There was a surge of feeling from without, a feeling of approval. Quickly another question followed.

There were many things I liked. I really enjoyed reading Pug-Milamber’s response to the carnage of the Imperial Arena, but I don’t want to quote that here, and I don’t really want to write a spoiler review, either. But the book can be read simply as a classic escapist high fantasy with some good characters, or as an opportunity to ponder and explore some questions, or whatever combination of the two appeals to the reader. It’s not by any means deep, but there is some thought and exploration in the way the book is written, the issues that are raised in the character’s lives, and their responses to them. For good or ill, it is very much a medieval-inspired fantasy.