Hello. I’m doing a Spotlight for authors who entered their books in the 8th SPFBO (Self-Published Fantasy Blog-Off) Competition. You can find out more details about that here, but today’s feature goes to John Palladino, who takes nothing seriously and who wrote a book about a university that teaches five branches of magic. At least, the book is titled for that university, and you’ll find out more if you keep on reading!

So, first off, let’s introduce you to John Palladino’s SPFBO entree, The Trials of Ashmount. 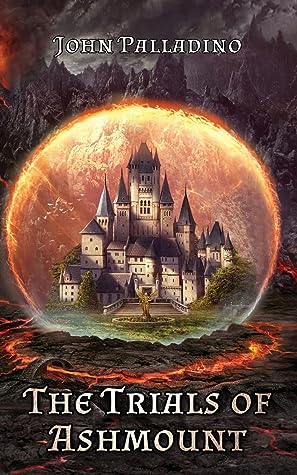 Cedain is destined to collapse.

Across a world rife with blood, betrayal, and brutality, five people wade through unexpected tragedies.

An egotistical student, a fleeing refugee, a nomadic warrior, a fallen noble, and a criminal in hiding navigate the sinister dealings of politicians, two sudden wars, and nefarious lies that surface at Ashmount—a university dedicated to teaching the five branches of magic.

You can get The Trials of Ashmount at Amazon here. But we’re going to learn a bit more because next we are …

Going onto the Questions!

I chose self-publishing because I didn’t have the patience to wait for an agent. I tried submitting a few times and having to submit differently for each agent was tedious – especially for several of them to never respond. My personal goal/hope is to succeed enough where an agent or publisher comes to me, because I’d love to be traditionally published.

Not having the patience to wait for an agent is certainly relatable!

I entered SPFBO because I thought it’d be a great way to launch the debut of my novel. As an unknown author, I figured it’d only help me find a little exposure. I followed SPFBO 7 because I’d heard about it and wanted to eventually enter. As for the stress? Well, I always assumed that I’d enter SPFBO and be eviscerated – but you know what they say, no press is bad press, or something like that. Especially as an unknown author. Even expecting this, however, there remains a smidgen of hope that, possibly, one can do well. And so, since my blog—Before We Go Blog—is cutting people every other day, I’ve been refreshing the Facebook page rather diligently.

Leastways, there’s very little press that can be bad press, and being cut from SPFBO certainly isn’t!

The Trials of Ashmount has five main POV characters—Kelden, Edelbrock, Villic, Seradal, and Demri and is the first in a series of four books. Each book is going to focus slightly more on a different POV. The first book focuses on Kelden, and so I wanted to name the book after his POV sections. His storyline focuses on the Magicai (an organization of mages) who reside at a place called Ashmount. In order to train with the mages, one must go through a series of trials to prove themselves worthy. I also knew exactly what art I wanted for the cover, and in order for that to make sense, I thought this title would fit perfectly.

That makes sense. It’s cool when cover art and titles match, and you sure have an interesting cover.

One of my favorite scenes is the end of the first Edelbrock chapter when he realizes how screwed he is. Here’s the last two sentences: Fuck. He may have even whispered it.

I’m not sure why I like this excerpt so much. I probably think it’s more clever than it is, but I love how surprised and shocked Edelbrock has become (not really surprising since I wrote this, I know). I think it’s partially because we all know how it feels to be absolutely dumbfounded by something so surprising, our mind isn’t functioning correctly.

That’s actually a kind of neat last two sentences, there!

This is another excerpt, this time from Demri. Demri is one of my favorite characters to write because of his stutter and his grumpiness. He is also the character most often cited as a reader’s favorite.

“Stop. Go inside and grab the m-m-m-money that fell on the floor. I f-f-feel like I slept on nails last night, and my body isn’t being c-c-c-cooperative.”

“Right, sir. Of course, sir.” The guard entered and returned a second later, holding the purse out.

Demri took the coins, ensuring he properly hung the sack from his belt. “Where’s C-C-Caius?” Always the fucking c’s.

This is an interesting quote, that makes one want to know more about the background! And, yeah, writing stutters can be a little fun. Or something.

With The Trials of Ashmount released, I’m currently writing the sequel and I’m 110,000 words into it. I also plan on releasing an anthology of short stories taking place in the same world as the series, where some characters return, some are unique to the anthology, and there are a few introductions to characters in the sequel.

I’d also like to thank you for interviewing me!

It was a pleasure! And now, let’s introduce you (readers) to a little more about John Palladino:

You’ve stumbled upon somebody who takes nothing seriously, not even author bios. It’d be a good guess to say John Palladino was born in 1988, lives in Avoca, New York, has a bachelor’s degree in Business Management, and enjoys hibernating at home while writing. He might also lie and say he enjoys pets, long walks on the beach, and his hobbies include happiness and scuba diving. You’d see right through those lies, however, and notice he prefers the simpler things in life—reading, video games, and making ill-timed jokes. John also dislikes taking care of anything that excretes substances.

You can find John Palladino

And in case you missed the link for The Trials of Ashmount, here it is again.