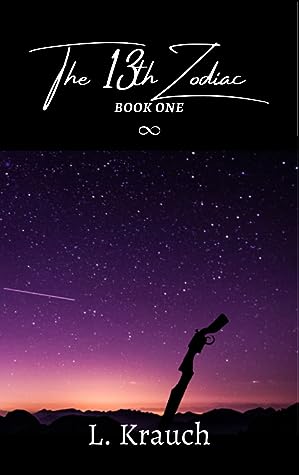 Running from his past finally catches up to Jase Raion, an ex-member of the Ashen Guard and the Crown Prince of Chall. After settling on the island of Aria, he receives an unexpected contract: The lost princess of Aria was discovered living in the port town of Brighton, on the outskirts of the island Kingdom.

A trip to the markets in Brighton ends abruptly as Liya Fairaway stumbles into Jase. She vanishes in the busy marketplace when Jase realizes who she is, the lost princess of Aria and the bearer of the 13nth Zodiac: Eternity. And his target.

Something ancient pulls them together, a bond that neither can deny. Reluctantly at first, Jase joins Liya and the other Zodiac to end the threat of Soren Raion, the King of Chall.

Time is not on their side, and Fate has other plans.

The best thing about The 13th Zodiac was Liya and Jase. Liya was a likeable character, and she felt so real I could almost feel the way she moved, the way her hair hung around her face, hear the tones and nuances of her voice. Jase was vivid and inspiring, and his story is heart-breaking and heart-warming all at once, and I want to know more of his backstory. I really enjoyed every moment of Liya. Her personality is spunky and heart-warming and gentle all at once. I liked how she took pity on Jase, and the development of the relationship between them. It was very genuine, and Jase is heart-warmingly protective, while also not being over-bearing, which is good, because Liya has had more than enough of that. I liked how drawn to and tender towards each other they are, without being protective in a bad way. I really, really liked these two characters, in different ways. There’s more pain and darkness to Jase’s past and to how he lives and copes with things now, but he’s got fire and light. And Liya is so sweet and full of a good energy, and they’re both strong. And it’s a very wholesome romance, without any toxicity and drama, but just a few moments of healthy tension.

Compared to Jase and Liya, the side characters were disappointingly flat, or at least not real. They were not unreal or anything. They had personalities, and the personalities weren’t flat in the sense of being really one-dimensional, and they didn’t act out of character. They’re actually quite well developed. But they didn’t jump off the page at me in a good way or a bad way (and both are appropriate for different characters). I suppose it was kind of like if they were black-and-white people, whereas Liya and Jase were full colour. It was a bit of pity, since I really wanted to like some of them, like Jemi and June and Tokei. I thought Jemi’s fierceness and loyalty and her protectiveness of Liya was awesome and sweet, and I liked things about the others, too. But, whereas I feel like I’d know Liya or Jase if they were to become real people and I’d meet them in a crowd, I don’t feel like I’d know Jemi or June or any of the rest. I might recognize something about them – like Jemi’s axe – but that’s different from knowing someone. So I liked Jemi a lot, and some of the others also, but not in the same way I liked Liya and Jase (not that I like those two in quite the same way either).

As for the world-building and the plot, the world-building was rich and beautiful and consistent, and I liked the myth-poem about the Titans, and also the Mother Tree. But the world-building and the plot felt, I don’t know how to say this, but a little superficial. Frivolous isn’t the right word, since I think frivolity is actually a beautiful thing. But it felt like the plot just existed to … be a plot. I don’t mean I noticed any plot holes or deficiencies in the plot. But I like what I read to be about something, to be an exploration or journey, sometimes an aimless exploration, a journey with no goals or direction in mind. This one did not feel like that. And, there was something else that ties into this that really disturbed me, but it’s a spoiler, so …

Near the end of the book, Liya is taken over by the Titan of Time (except that it’s a bit more complicated than that), who wants some pretty rotten things. The Titan of Time kills Jase a whole bunch of times, and Liya turns back time to before Jase dies, and begs Jase to kill her so the Titan of Time can’t destroy everything. And Jase does so. (He also revives Liya, since as Fate he has power of Life as well as Death.)

I really, really hated that. I found it quite disturbing and it just left a bad taste in my mouth with regards to the book. So I try to enjoy Jase and Liya and the rest of it, and pretend that did not happen, or ignore it. And, to be as clear as possible, the revival of Liya wasn’t the problem. Sometimes, I feel like a character should have died but the author just wasn’t willing to let that happen. This wasn’t one of those. Jase killing Liya/Time that was the problem for me, and I’m not sure how I feel about Liya turning back time either.