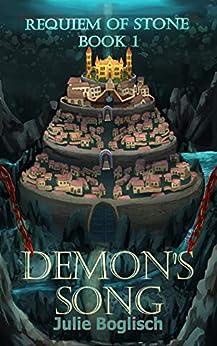 Alex always wished to see the Overlands, a place of sunshine and freedom. However, as a slave in the far corners of the Underlands, it was all but a dream. That is, until he’s framed for murder and is forced to flee during a demon attack.

Searching for the answers to why he was framed and seeking a chance at the fleeting freedom he’s always dreamed about, he journeys to the capital, meeting friend and foe along the way. But the Underlands are both beautiful and dangerous. Having a demon hunter on his tail and a witch whose sole desire is to become the high Seer around him, he’s in for quite the journey.

Demon’s Song is a story about family, found family, loyalty, and freedom. I read in a somewhat haphazard way, reading a few pages at the beginning, then jumping in partway through, then reading the beginning of the end, then reading the rest of the beginning, and then the end, so that affected my initial reading experience. For some reason, that seems significant enough to mention about this book (though I read haphazardly as often as not).

Everyone in the Underlands wear signifiers, constantly marking what their position is in the social strata. Except for Alex. Alex is legally a slave, as his parents, but the Duke on whose lands they live has adopted Alex as his son and removed the signifier of a slave – chains around the wrists – while Alex was still too young to have clear memories, in defiance of the law. So Alex has to hide, whenever the Martinets come by, to visit and inspect. Meanwhile, the Grand Duke of Liliay is trying to have him legally acknowledged as his adopted son, and has had put Alex’s name in his will.

Alex pines for the Overlands that he has never seen, only heard of in tales. Alex doesn’t even know anyone who has seen the Overlands – the place where the sun shines, where storms gather and rain falls and there is wind. All Alex dreams of is someday leaving the Underlands and going to the Overlands.

Then, one day, when the Martinets come for their inspection, things go terribly, terribly wrong. Alex finds his mother and the Duke chained, his mother tortured, and he tries to rescue them, but instead the Duke is killed, his mother remains captured, and Alex is framed for killing the Duke. Barely in the nick of time and totally unprepared, Alex flees into the unknown only with the help of a powerful demon who seems to appear out of nowhere and speaks to him before he goes.

Alex, sheltered all his life, flees headlong with the vague notion of going to the capitol to rescue his mother somehow. Unable to care for himself, starving, encountering the existence of horrors he’s never really had to acknowledge before, and having to hide lest he be captured and enslaved, despite his lack of signifiers, Alex runs into Rita, a young noblewoman who is training to be a witch and hopes to eventually make High Seer, and who absolutely has to extend her apprenticeship as long as possible, and hopefully land a new one as soon as it has to be completed, since a nobleman who has no respect for the desires of other beings has his mind set on her. As long as she is apprenticed, she can not be married, but she loses that protection when she graduates her apprenticeship.

The characters were very interesting. Alex, as well as Rita and Milos, had layered, developed personalities, though it felt a little artificial or external, a little designed. I liked Alex; I liked his loyalty, his feelings, his desires; his struggles to deal with the world he’s been thrown into. He doesn’t think everything through well, but he does think and he tries, and he’s very overwhelmed. And there are some questions about trust, about answered or unanswered questions and withheld knowledge, between him and Rita, him and his mother, that come up. Trust, loyalty, friendship, family, freedom, personal growth, and grief and what grieving looks like for different people, are all elements of this story.

And that is this for this review. I don’t feel a need to go into the spoilers and the things that happen in the latter part of the book for this review, even though I read it very haphazardly and read bits and pieces of the last several chapters fairly early in that haphazard process.