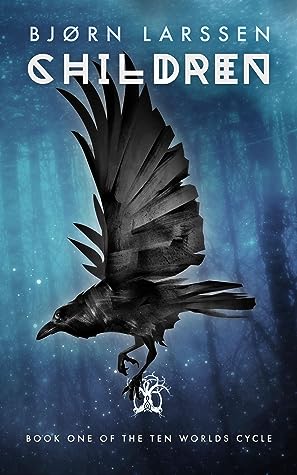 All Magni wants is peace and quiet, but when your father is the God of thunder, you don’t get to live the life you want. When Thor destroys all his son knows and loves, Magni vows to bring prosperity and end the violence … forever. But can you escape cruelty in a universe built on it, or the shadow of your father when everyone calls you by his name?

Maya, her rage more powerful than she knows, wants freedom to pursue her own destiny. Neither torture nor blackmail can make her obedient or pretty enough for Freya, her foster-mother and Goddess of love. Fighting for independence and revenge, can a mere human win a game where the Gods dictate the rules?

When I picked up Children, I did so knowing the book might be too dark (grimdark) for me, but willing to take the chance since my taste is interesting and I sometimes enjoy books that are quite ‘grimdark’, even though I tend to avoid anything I find depressing, and since I’d been reading the author’s blog and interviews and I was entranced by his approach to story-telling and to writing characters (and not just writing characters, though I can’t see how writing characters can be fully separate from this, but to approaching some of the elements that can go into making a story grim-dark).

I can say it was grimdark. I found it depressing and dark, and while I don’t read horror, there were scenes that I think had a horror feel. On the character side of things, it absolutely did not disappoint. Bjørn did a spectacular job bringing the reader into the point of view of the characters, so much so that I shared in Magni’s emotions and responses, in his confusion and overload, to a very high degree. I think that might be uncomfortable for some readers, but I liked it. The story is written in first person, and whereas with many books written in first person I don’t really notice that it’s any different from one written in third person, in this case I absolutely did, and it was all good.

I have read few books that perform immersion to the same degree that this one did. When Thor caused havoc in the palace-halls of Jotunheim, it was as if I saw through Magni’s eyes and through Magni’s mind. I wondered Magni’s thoughts, was certain of what Magni was certain of, was as confused as Magni. That was the scene where I found this experience most notable and obvious, but it was present throughout the book, and in both characters. The characters themselves are genuine and feeling – they have to be to allow for this much immersion, in my opinion. Magni’s thoughts and world-view is that of a good child. There’s a quality of innocence – I don’t mean sexually, though he does strike one as very much unready for anything of that nature; that aside, I’ve never understood what innocence/purity has to do with sexuality or lack thereof – to Magni’s thoughts and intentions, even when he’s been forced to acknowledge and experience far too much horror. But even at the beginning of the book, Magni is quite aware of evil and disaster, of people being hurt and killed, of people abandoning others and not caring or attacking people they shouldn’t. There’s not much more relateable than his thoughts about how humans don’t say what they mean, and what do they mean, and how does one understand these people.

Magni just wants to do good, and help people, and be nice. He knows there’s evil and cruelty, but he never understands why. Or even really what. I truly liked this. I like seeing characters who are simple; honest and true at least to themselves and at least more or less (though Magni isn’t much of a deceiver at all). It’s not necessary for characters to have “subtext,” mixed or hidden motivations, to be real and compelling, and I really enjoyed Magni. But, perhaps precisely because Magni is so lovable and loving, the book is so dark and depressing. The sweet man-child who would never hurt anything ends up killing and hurting and stealing from other people as desperate – or nearly as desperate – as himself; and at least they will be after he hurts or kills or steals from them (I think this isn’t a spoiler, since the book is, admittedly, Grimdark, and if anyone wants to read a review at all, I think this isn’t too much; if I’m wrong, you can know that Raina-who-reads-books-backwards tries, but has no actual intuition for what is or isn’t a spoiler). That was more hurtful in this book than it could have been in almost any other. More hurtful to happen to this character than it could have to almost any other. Yet Magni doesn’t become someone completely evil or callous. In the last acts of the book one sees it as strongly as ever: Magni’s great, controlling desire is protect his people, the jötunn (also called ice giants) of Jotunheim, forever, at whatever personal cost to himself. And he can’t hate anybody, even people who are utter assholes and how can one possibly be as callous an asshole as that? I haven’t read a lot of Grimdark, so I can’t say for sure, but I think Children differs from a lot of that genre in the character of Magni.

Don’t take my lack of much to say about Maya as indicative that she is at all bland or boring. She’s not. However, she stood out to me less than Magni did, and I found Magni’s story to arouse a lot more in the way of emotions and thoughts than Maya’s. There’s actually a lot to say about her, and I really enjoyed her friendship with Magni. There are sometimes that she second-guesses it (later in the book, and you’ll find out why), but I get the feeling that Magni has made a very big impact on her, and they’re very much friend-friends. Her loyalty to him goes deep, and she helps him out in some very big ways, even when she doesn’t know what he’s planning. I’d say their relationship is fairly wholesome. Maya is an awesome character, and I would have enjoyed the character side of the book if it was just her (well, perhaps not really, since how would the book even exist without Magni?), but what I’m saying is that Maya isn’t a deficient character in any way. I’m just not in a mood to speak to her after Magni, who speaks to me a lot more.

I’d say what makes the book most depressing is nearly stated in the blurb: a universe built on cruelty. This is the world of Children. Not a world where there is a lot of cruelty, but a world fundamentally built on it. A world where cruelty seems ultimate. What’s beautiful is Magni’s determination to make a better world that rises like a pheonix from the ashes. His kind, caring heart that never completely dies for good. But the book is really sad and depressing, and Magni’s beauty only makes it more depressing – in what happens to him, in the ways he is broken, in what he does.